Skip to content
1shares
Some of the links in this post may contain affiliate links for your convenience. As an Amazon associate I earn from qualifying purchases.

Just in case you missed it, hundreds of thousands of people in Charleston, West Virginia, and the surrounding areas were without water in what is truly a worst case scenario. I’m sure many were prepared with stored water, but storing water for a week or more is something few people have considered.

Bob Keller who runs a survival supply store in Charleston was right in the middle of this crisis. I asked him to write about how his family’s experiences and what they have learned. 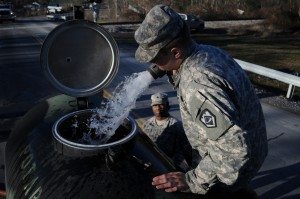 The day before any event is ordinary.  On Wednesday, I worked through my day as usual and Thursday was much of the same.  I came home and decided to take a quick nap.  My wife called and told me to turn on the television:  The Governor of West Virginia was declaring a state of emergency and a ‘Do Not Use’ order was issued for water in Charleston, the capitol city, and parts of nine counties.

A local chemical distributor, whose business is located slightly upstream of the water intake for the local water company, had leaked a substance called 4-Methylcyclohexane Methanol, used to clean coal prior to transport, into the Elk River, a tributary of the Kanawha River, in the middle of Charleston.  Officially, the amount of the leak was 7500 gallons.  To put this in perspective, my wife’s Honda Accord holds about 15 gallons of gasoline.  This would be equivalent to 500 Honda Accords.

As we soon learned, not much is known about the consumption of 4-Methylcyclohexane Methanol.  Like so many industrial chemicals, it had never been tested for human toxicity.  The only test conducted by the manufacturer, Eastman Chemical, was the amount of it necessary to kill a rat.  This lack of data, coupled with the conflicting information released to the public about the situation, added to the chaos.

Charleston is located in what has been called “The Chemical Valley”.  Beginning in the 50’s, most of the major chemical companies had manufacturing facilities in the area.  As business changed, many of those facilities outlived their usefulness and have since closed.  Still, there is a significant amount of chemical manufacturing here.  I say this so that you know that this is part of our local culture.

I was born here in the late 60’s, long before the Clean Water Act or the Clean Air Act.  I have seen the results of an ‘unscheduled release’ settled over the cars and houses like an early snow and have seen literally hundreds of dead fish floating in the river because of an upstream chemical spill.  Never, not one time, do I remember the water company issuing a ‘Do Not Use’ order.

Losing water service, on the surface, seems like a fairly mundane inconvenience.  A water main breaks, a ‘boil water’ advisory is issued, and a day or so later life returns to normal.  It was apparent rather quickly that this was different, very different.  Almost immediately, the school systems closed indefinitely and the health department closed all of the restaurants in the affected areas.  We began to hear about locations where we could get safe water (FEMA, by the way, has only provided about one gallon per person to be used over the entire emergency).

My family, as preppers , was largely ready.  We had stored water and had empty water jugs available.  We also had a rainwater catchment system ready to be installed in such an event.  When any event happens, one thing you learn quickly is where you were not fully prepared.  It uncovers the holes in your prepping plan.  The two areas where we were not fully ready were laundry and bathing.  We will be working to fill those gaps.  Luckily, we have several friends in the adjacent county who are served by another water company.  We trekked over for an afternoon last weekend and did some laundry, took showers, visited, and shared dinner.  It was good.

Currently, we still do not have a safe supply of water.  Today is Day 8.  The national media has gone home, the local officials have disappeared from the media, and the water company constantly tells us that the water is safe.  However, the U.S. Centers for Disease Control (CDC) issued a warning telling pregnant women not to drink this water and local pediatricians are warning against young children drinking this water.  Over a thousand people have visited hospital emergency rooms after being told the water was fine.  Is it safe?  I don’t know.  It still smells terribly and has a greasy feel to it.  Is my family using it?  No.  There are things much more important than tap water.