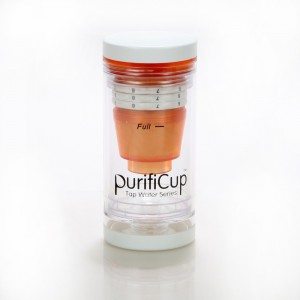 When I posted my review of the PurifiCup and mentioned that it reduces fluoride, there was a flurry of interest. Fluoridated water has become very controversial in the past few years with some arguing that it amounts to involuntary mass medication. Not all cities fluoridate their waters and in some parts of the country, well water contains fluoride.

As questions arose about the PurifiCup’s ability to reduce fluoride in water, I contacted Robert Kao who heads the company out of Dallas. The product was developed in Taiwan and Japan where water isn’t fluoridated, so although he knew the PurifiCup’s filter reduced the amount of fluoride in water, he wanted to learn more about it and see if his product could be improved to remove even more.

In an email to me he stated:

First, because of our manufacturing partners in Taiwan and suppliers from Japan do not use any fluoride in their countries, and due to the different values of each city’s application in concentrations varies.. we had to do the (fluoride) test in the U.S. We have found the most common fluoride level in U.S. cities to be roughly 0.40-0.86 ppm (parts per million). So we did our testing with tap water from the city of Plano, Texas. The City states the fluoride level to be between 0.46ppm -0.66ppm range.

The following video shows the complete process of first, calibrating the meter from Hanna Instruments and second, testing both the City of Plano’s water for fluoride and then a sample that had been filtered by a PurifiCup.

In short, the city water measured a fluoride level of 0.66 ppm and the PurifiCup water reduced the level to 0.33 ppm.

Not satisfied with this, Robert instructed the PurifiCup lab in Taiwan to improve the cup’s filter by adding an additional ingredient, which will help reduce fluoride even further.

In my past experience in the business world, I know it’s all too easy for a large company to let customer questions remain unanswered or to provide unsatisfactory answers. Robert’s response to me was, “The exciting part for me was learning that fluoride is a concern of Americans” and he went on to say that he was grateful for the opportunity to improve the PurifiCup even more so.