Skip to content
8 shares
Some of the links in this post may contain affiliate links for your convenience. As an Amazon associate I earn from qualifying purchases. 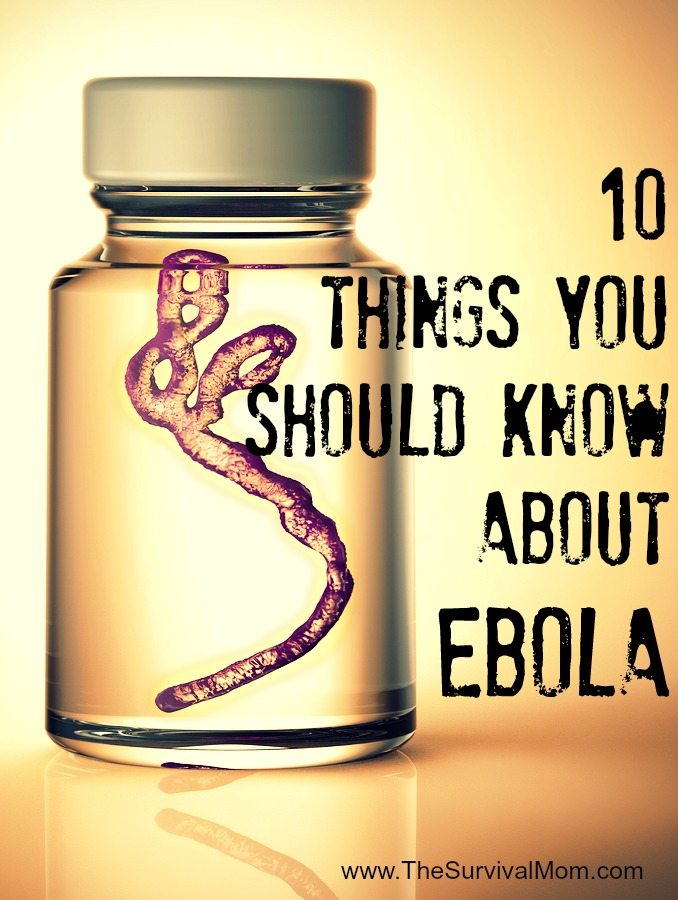 Like many of you, I have been trying to keep up with stories about Ebola, ever since this terrible virus reared its deadly head, again, in Africa. At first, the stories were interesting and a lot of us in the prepper/survival niche toyed with the idea of, “What if it came to America…”Well, now it’s here, and by the time you receive this email, things could have gone very, very wrong, indeed. Or, perhaps not. We now know of at least one more confirmed case of Ebola, a nurse who had been attending the infamous Liberian patient, Thomas Eric Duncan. If we’re lucky, that will be as far as the virus spreads.  Another possibility is that the Ebola hype has died and another potential pandemic is on the horizon.

I originally sent this article to my newsletter subscribers but I’ve received so much positive feedback that I wanted to share it on the blog as well. I do send out exclusive articles to my subscribers, and you can sign up for these here.

There are 10 things you should know about this Ebola scare, and they apply to any type of outbreak:

1. If you’re prepared, in general, you’re already prepared for Ebola or any other outbreak. Almost. Be reassured that you have many survival pieces in place and are way ahead of the game, if the worst should happen. Now it’s just a matter of adding some additional supplies and making a few, new plans. Just in case.

2. Almost prepared for something like Ebola isn’t good enough! In addition to your food, water, cooking/heating, and other preps, you should begin adding:

Here’s a big word of warning. We’re seeing healthcare workers who have worn professional, protective gear become infected with this virus. In no way am I suggesting that the supplies on this list will keep you safe if you are face to face with an Ebola patient. Until we know more about how the virus is transmitted, and I don’t believe even our most expert experts know for sure, the best course of action is to avoid any known areas with the infection.

3. Begin thinking about hunkering down, in place, for weeks or possibly months. If any pandemic grabs a foothold in your area, say within 100 miles, you won’t be able to go to work, the kids will stay home from school, even going out to buy groceries or other necessities may be too dangerous. What should you have on hand in this case? Could you begin homeschooling your kids? Do you have cash on hand, rather than just in the bank? Read The Jakarta Pandemic for some practical tips.

4. Keep track of news from multiple sources. Information coming from the CDC is scary, not reassuring, and they are supposed to be the ultimate source for controlling disease. On the other hand, some voices on the internet are screaming that it’s all over and we’re doomed. Read everything you can and assess information from multiple sources.

These five articles that have given me a lot of insight and food for thought:

5. If now is the time to panic, you absolutely must not panic! This is the time to assess your preps, get the facts and the latest information. Prepare to hunker down or pack up what you can and head for a part of the country that remains unaffected. Thinking clearly and making logical plans will be your 2 best survival preps.

Having said that, if a particular website or radio host or friend is a source of nothing but negative, doomsday information and you find yourself swallowed up in it, avoid them. Just a friendly tip from Survival Mom!

6. At this point, normalcy bias could be your worst enemy. I never dreamed that you and I would be talking about EBOLA in AMERICA, yet here we are. There’s no point in trying to take comfort in, “It’s just one guy in Dallas.” That’s normalcy bias talking. If the virus made it this far, it’s likely to pop up again, and again. That could be our new reality. Hiding behind, “It couldn’t happen here…” is the least helpful thing you can do.

7.  Work hard to become as healthy as you possibly can be. It doesn’t appear as though Ebola’s effects are more profound against the unhealthy, aged, and/or weak, but Ebola isn’t the only potential pandemic on the horizon. Build your immune system by paying attention to your body, first and foremost. When you’re tired, rest, and get plenty of sleep. Spend time outdoors in the sun and nature. Eliminate sugar and processed foods from your diet as much as possible. Strengthen your muscles and overall stamina through regular exercise.

8. Introduce any changes to your family routine slowly and matter of factly. Scaring kids with horrific tales of Ebola or any other disease and its effects will only instill panic. Being a bit more cautious than usual around sick family and friends, taking some time off from school when flu reports become widespread, teaching kids to wash their hands more frequently — none of these are wild-eyed, tinfoil hat responses! They make sense and when you have a low-key explanation, kids will cope just fine.

9. Be prepared to take action before officials give the go-ahead. Officials at all levels, including school districts, fear nothing more than panicked citizens. When a large number of people panic, they begin to take actions of their own. This might take the form of demanding accountability from individuals and agencies or it could take the form of riots or worse.

Try to stay one step ahead by getting your information from multiple sources. If you have friends or family in the medical field or in government agencies, ask for insider information.

10. Continue to enjoy life. Make plans for holidays and birthdays. Go ahead and try to lose those last 15 pounds! We’ve seen good times and bad times come and go, but what keeps us steady and sane are the little things in life that aren’t so little — family, faith, friends. In the stories coming from the Ebola hot zones, there’s something that comes up over and over: family bonds and traditions. It’s important that we keep those going in our own homes and communities.

As a Christian, this verse from Ephesians 6:13 comes to mind:

“Therefore take unto you the whole armor of God, that you may be able to withstand in the evil day, and having done all, to stand.”

You may not be a Christian and this article isn’t about the armor of God, but as a group we are determined to survive and are every bit as determined as any ancient warrior. So to paraphrase, “Take unto you all common sense preparation plans both for you and those you love that you may be able to stand strong during worst case scenarios, and when you’ve done all you can, stand strong.”

43 thoughts on “10 Things You Should Know About Ebola”