Skip to content
112 shares
Some of the links in this post may contain affiliate links for your convenience. As an Amazon associate I earn from qualifying purchases. 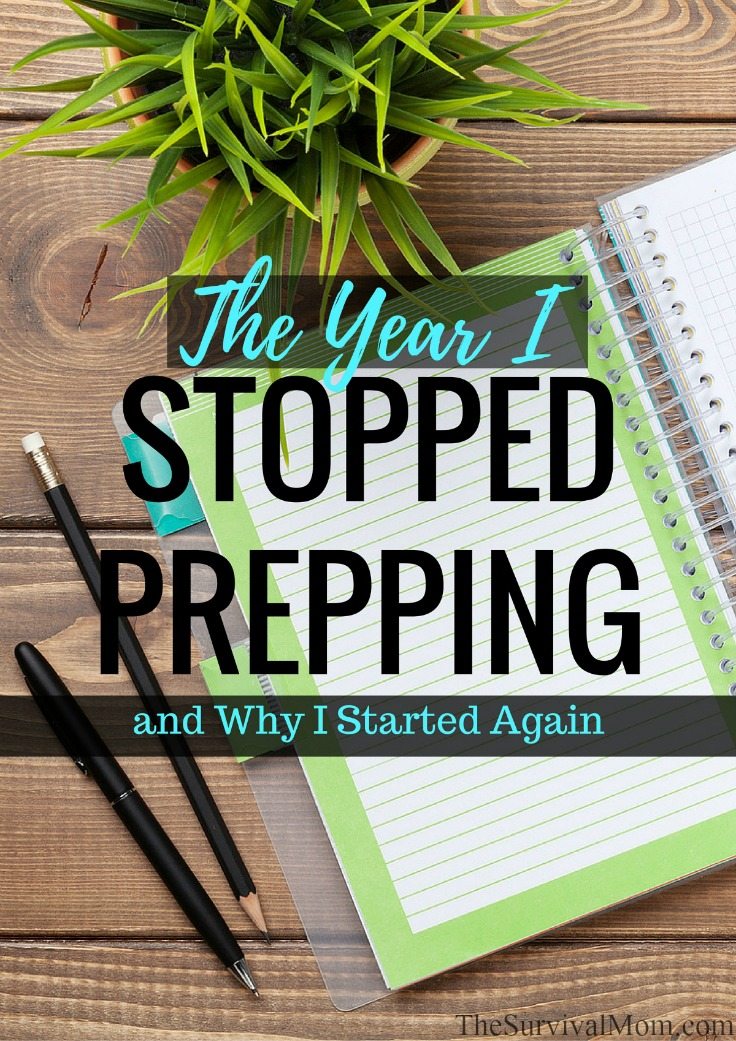 As far as I know, after almost 8 years, we are still the only preppers, with one lone exception.

It’s not something we talk about with anyone. Loved ones on both sides are busy with their own lives, playing computer games, dealing with office politics, and all the thousands of distractions that are a part of daily life for all of us.

For the past year or so, I, too, became a non-prepper.

Yep, The Survival Mom, “Queen of the Preppers”, as I’ve been called, just didn’t prep. If it hadn’t been for my monthly auto-ship from Thrive Life, my food storage pantry would have been neglected completely.

Why? Life got in the way. I took on the task of coordinating a new co-op for homeschooled high school kids, got involved with my kids’ sports activities and driving for hours each week taking them to practices and games. I was busy running the blog and writing about prepping, but in total honesty, prepping became the furthest thing from my mind and I didn’t do any prepping.

There’s a huge difference between reading about survival and preparedness and actually taking action.

You would think that I would have noticed the gathering storm clouds. During that year, the economy did not get better. The political status of our country became more volatile than ever. My small city was surrounded by historic flooding — and there I was, as much of a non-prepper as the average fun-seeker at Disneyland.

What kicked me back into gear

Facebook can be a funny thing. I have a love/hate relationship with it most days, but it was a post featuring an interview with author Matt Bracken that reminded me of why I started prepping and why I’d better get back into the game.

For a few years, I have been a fan of Matt. He’s written a number of common sense books and essays about possible collapse scenarios right here in the U.S., and because his thought process is logical and he pays no heed to political correctness, I pay attention when he talks.

I’ve never forgotten his vivid description of a potential scenario in which innocent commuters become trapped by angry rioters in a scenario of economic collapse because it’s one I can easily envision:

Rioters will throw debris such as shopping carts and trash cans into the intersection, causing the more timid drivers to pause. The mobs will swarm the lines of trapped cars once they have stopped. Traffic will be forced into gridlock for blocks in all directions. Drivers and passengers of the wrong ethnic persuasions will be pulled from their vehicles to be beaten, robbed, and in some cases raped and/or killed. It will be hyper-violent and overtly racial mob behavior, on a massive and undeniable basis.

Some of those trapped in their cars will try to drive out of the area, inevitably knocking down MUY (Minority Urban Youths) pedestrians and being trapped by even more outraged MUYs. The commuters will be dragged out of their cars and kicked or beaten to death. Other suburban commuters will try to shoot their way out of the lines of stopped cars, and they will meet the same grim fate once they run out of bullets and room to escape.

The mob will be armed with everything from knives, clubs and pistols to AK-47s. A bloodbath will result. These unlucky drivers and their passengers will suffer horribly, and some of their deaths will be captured on traffic web cameras. Later, these terrible scenes will be released or leaked by sympathetic government insiders and shown by the alternative media, which continue to expand as the traditional media become increasingly irrelevant.

Grim, in the extreme, but as Matt continues developing this scenario, he describes how quickly social media and the use of technology can bring these crowds together and, just as quickly, disperse them, sending them to a different intersection far enough away to elude law enforcement, who arrive too late. You can read his entire essay, “When the Music Stops — How America’s Cities May Explode in Violence.”

Even if he’s just half right…

The current tumultuous political season is likely to grow worse with demonstrations, riots, and violence becoming more frequent and extreme, with the status of the U.S. economy teetering on the brink.

So, I told my son to go around the house and round up all our flashlights! Yeah, it wasn’t much, but it was a tiny step to begin checking up on all the preps we have in place. We checked the batteries of those flashlights and then made sure every room in the house and each emergency kit (bug out bag) had at least one of them in place.

We next took out our bug out bags and began going through them. My daughter had packed hers last year before she lost a few pounds, and we found that she needed a different change of clothes in a smaller size. My walking shoes needed new shoelaces and snacks we had packed so long ago, just needed to be thrown out and replaced.

It wasn’t so much that the flashlights were a do or die for our future survival and my daughter could have easily worn those too-big clothes. What was important was the change in my own mindset and then, taking action. Starting with small, basic steps clears the way for more small steps, and, ultimately, that’s what prepping is about.

Just about the same time as I began to refocus on prepping, I was able to step away from the co-op that I had helped found. It’s on solid ground now, with some excellent teachers and eager students ready to start classes in the fall. I’m blessed that I was able to help construct something that will impact dozens of young lives, but my role in that venture ended, and, really, the timing was perfect.

Matt wasn’t the only voice I heard that urged me into a new phase of my prepping. Others have contacted me with insights into our economy and political status and their warnings ring true.

So now I’m back. I’m in the phase of evaluating our preps. What are the steps we’ve taken so far? What have we neglected? Have we done too much in one area and not enough in another?

As I’ve gotten back on track, it occurred to me that there must be hundreds of thousands of other preppers who also have seen warning signs. They don’t expect the government, at any level, to come to their rescue in a big enough crisis. They figure they’ll be on their own, whether it’s a hurricane, earthquake, or devaluation of the dollar that hits.

Help is on the way if you’ve stopped prepping

Probably the smartest people right now in America and beyond are those who have realized that it’s their responsibility to have the plans and preps in place to survive. If you’re in that group, congratulations! While much of the world is focused on the drama of the day served with a smile by the mainstream media, you’re focused on learning about water and food storage, growing your own food, and how to not be a victim, if at all possible.

Like me, though, maybe you’ve lost your way. Your good intentions have been neglected because of life, or maybe you forgot why you were prepping in the first place. Maybe you look at your buckets of wheat and Berkey water filter and feel a little guilty because that money could have been spent elsewhere.

You need a nudge to get going again.

To get your own prepping mojo back into gear, do this: 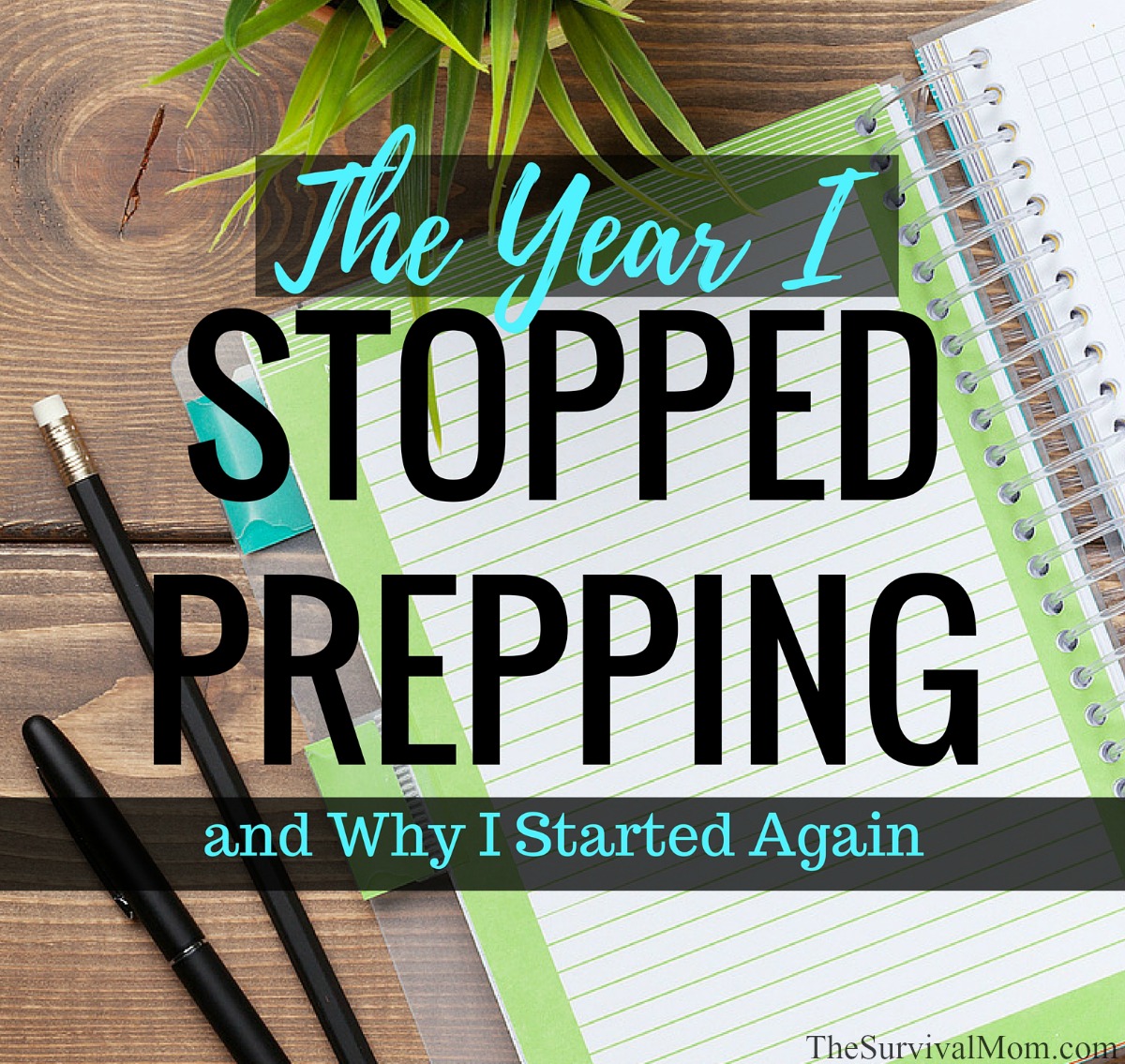