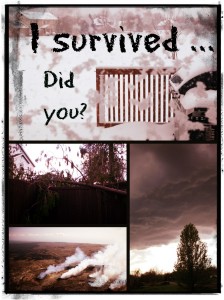 It’s time to share our best survival experience tips. I’ve got several I’ll share. At first, I didn’t think I would have that much to share, but as I look back over my military brat and wife life, I’ve sampled almost every kind of disaster.

When I was little, we lived in Okinawa, and later, in Japan. Instead of snow days in the school calendar, there were typhoon days. A typhoon is a hurricane, except you really can’t evacuate anywhere when you live on an island. I weathered several typhoons as a child and never feared them.

Survival tip: Children take their cues from their parents. Stay calm in, no matter the situation, and the children will, too.

Japan has an average of four earthquakes a day, but most of them are so small people don’t feel them. I actually never felt any big ones in Japan, but did feel one later in life in Alaska. It scared me because I had no warning, but my instincts kicked in from doing earthquake drills as a child.

Mount Pinatubo erupted in the Philippines when I lived in Japan. My father had to go help clean up Clark Air Base. I don’t recall being affected by the ash, but we did see people evacuate to the base we were at. Surprisingly, we were always worried about Mount Fuji erupting. Later, in Alaska, we faced the potential eruption of a volcano and prepared ourselves with masks, plastic sheeting, duct tape and air filters for our vehicles.

Survival tip: Think through all potential scenarios. It may be the one that is least likely to happen that does happen.

We lived on a military base overseas when the Gulf War kicked off. While wars may not be often fought on American soil, overseas military (and their families) often get a front seat to the conflicts. The start of the war was announced over the school intercom. Building signs were covered over with black bags. Identification had to be produced everywhere we went. Families of deployed military needed us to help them.

Survival tip: The world can change in an instant. Be prepared to help children deal with hard situations.

With our luck, when we were moving from Japan to Utah, we happened to land at LAX just at the L.A. riots were happening in 1992. After hours of traveling with 13-, 11- and 7-year-old kids, a dog, a cat, and lots of luggage, my parents faced having to put us on a connecting flight to Utah instead of a direct flight.

Survival tip: Learn to be flexible and carry cash. Some food and extra comic books can do wonders helping children adapt to change.

As a single, young adult, I evacuated from Florida with a few of my belongings and my cat. I dragged my mattress from the second floor of my condo to buffer my piano from any wind and rain should my windows break. After it was over, I drove back through small towns that had been flattened by tornadoes and found out that I had no power and very little food. I honestly hadn’t thought about the grocery stores being without power either. I think I lived on peanut butter sandwiches for two days.

Survival tip: Always be prepared for a few days without power, even if the only person you’re taking care of is yourself.

I’ve seen several blizzards in Colorado, Alaska, Missouri and Ohio. We’ve been able to judge when we can go out and know how to drive for the conditions. There have been times of skidding and getting stuck in the snow, but our vehicles are prepared to get us out of such situations. Which way do you turn the wheel when your car starts skidding? Are you willing to turn around and go back home if the roads are worse than you thought? If you stay home, are you prepared to be stuck at home? My children were home on winter break a whole week longer than scheduled last year due to winter weather.

Survival tip: Learn and know how to drive for potentially unsafe conditions. Give yourself extra time to get where you are going. When in doubt, stay in place, and be prepared to stay in place.

Remember the furloughs and military budget battles? That meant some people had paychecks delayed. Bills don’t get delayed, though, and little mouths still need to be fed. When it’s hard to tell when and if you might be paid, putting the bills on a credit card and adding interest is the last thing you want to do.

Survival tip: Have something saved up to help with hard times, whether it is food or money. Look and know where the budget can be cut.

Time to share – what event have you survived and what one tip can you share with others?