4shares
Some of the links in this post may contain affiliate links for your convenience. As an Amazon associate I earn from qualifying purchases.

I’ve always been afraid of tornadoes, even before I heard of the Wicked Witch of the West and, “Surrender Dorothy!”

Anybody who grew up or lived near Gilbert, in Central Iowa, is familiar with the destructive, whirling wind patterns. The movie “Twister” was filmed about 40 miles away from our family farm, and all the locals can tell storm stories.

One year, our neighbors lost their house to a funnel cloud. Across the road from them, a barn was blown away. But the grand-daddy of all Iowa tornadoes, though, happened on June 13, 1976, when a tornado rated F-5 by the National Weather Service hit nearby Jordon.

My Dad saw this funnel cloud headed in his direction when he was cultivating corn. He abandoned the tractor and ran for shelter.

My siblings were home on the family farm, and noticed the weather was hot and humid and everything was getting really still. Dad was cultivating in the cornfield and saw the funnel cloud. He abandoned the tractor and headed for the house.

“It was the first time I ever saw Dad run,” my brother Mike recalls. “As soon as he was in earshot he started yelling for us to get to the basement.”

The National Weather Service indicated that the damage path of the Jordon tornado was roughly 880 yards wide and 21 miles long. The twister destroyed virtually every house and business building in Jordon, but all residents survived. The tornado was accompanied by an F-3 anticyclonic tornado a few miles away.

Shortly after the Jordon tornado, Dad built a concrete re-enforced storm shelter under the front porch. The neighbors were told where the shelter was and were invited to take refuge there if need be. And, if the house was blown away, they would know where to look for survivors!

(If you want to build a tornado shelter, a good place to start is by reading the Federal Emergency Management Agency manual called “Taking Shelter From the Storm: Building a Safe Room Inside Your House,” FEMA-320. )

I’m still afraid of tornadoes, and if you live in an area where tornadoes are possible, you should be too! You owe it to yourself and your loved ones to be prepared so you will know what to do.

So what is the first step? 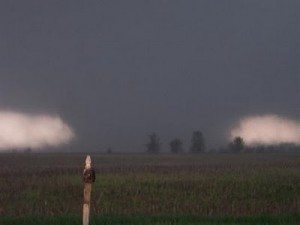 An approaching tornado is terrifying: Know what to do before hand, so you don't panic and make fatal mistakes.

Start by learning about tornadoes and what you can do to survive them. Here’s some suggestions from the FEMA:

Before the potential tornado, be alert to changing weather conditions.

If you see approaching storms or any of the danger signs, be prepared to take shelter immediately.

Here’s a survival scenario learning exercise. You’re aware there is a storm watch with potential twisters, and you’re keeping a lookout.

Then someone spots a funnel cloud headed in your direction.  What’s the first thing you need to do? (And don’t depend on others.  In any crowd, in any urban or wilderness survival emergency, about 80 percent of the people there will have to be told what to do)

One choice might be to start with STOP (Stop, Think, Observe and Plan), the survival mindset exercise.  You can’t think if you have panicked, and you must force yourself to calm down. Then, make a plan.

That’s where the knowledge part of your wilderness survival gear comes in. Instead of drawing a blank about what to do next, remember this advice from the FEMA. These suggestions are part of your survival kit, and will give you an idea of how to respond. 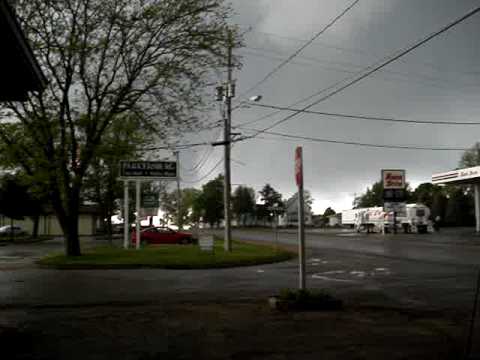 If you’re caught in a public building or school, FEMA suggests you get to an interior room or hall or the ground floor.  (It could be dark, so hopefully, you’ll have your keychain survival flashlight in your pockets.  The person with the flashlight, who acts like he/she knows what he is doing, automatically becomes the leader. Know where you’re going!)

Avoid halls that open to the outside, or any places with a free-span ceiling that could collapse, such as an auditorium or gym.

It’s not true that mobile home parks attract tornadoes. But, it is virtually impossible to secure a trailer to a foundation well enough for it to withstand tornado-speed winds.

And above all, don’t do stupid things. Don’t stand in the yard videoing the approaching cloud – the flying debris can kill you before you realize you’re in danger. I’ve seen oat straw driven into a tractor tire, and a 78 phonograph stuck in a telephone pole by the force of tornado winds. Don’t waste time taking things out of your home if you have to evacuate.

In Iowa, with its precise road system laid out in square mile grids, many people would park during storms at a crossroads, with their vehicle engines idling. If they spotted a tornado, they would drive off at a 90 degree angle from the funnel cloud.

Exercising the wisdom of teenagers everywhere, some of my friends would gather at popular crossroads, just to have a chance at outrunning a storm. According to the National Weather Service, the average speed of a tornado is about 30 mph, but they travel as fast as 70 mph, and they can change directions without warning.

The experts recommend that you never try to outrun a tornado in urban or congested areas. Instead, leave the vehicle immediately for safe shelter.

Farm kids were taught early to seek refuge in a culvert under the road if  they get caught in the open during a twister. I don’t know anybody who ever actually did that, but it seems like a good idea. If nothing else, the culvert would offer some protection from flying debris.

Basically, if you found a safe spot and hunkered down until the wind quit blowing, you should be OK. If you were in a building that blew down, emergency personnel will probably be on the scene shortly after the all-clear sirens go off.

Recovering from a disaster is usually a gradual process, according to FEMA. Safety is a primary issue, as are mental and physical well-being. Stay away from the rubble and don’t touch any fallen electrical wires.

Then, be thankful.  You’ve experienced one of nature’s most dramatic and deadly displays. And you’re alive to tell the tale!