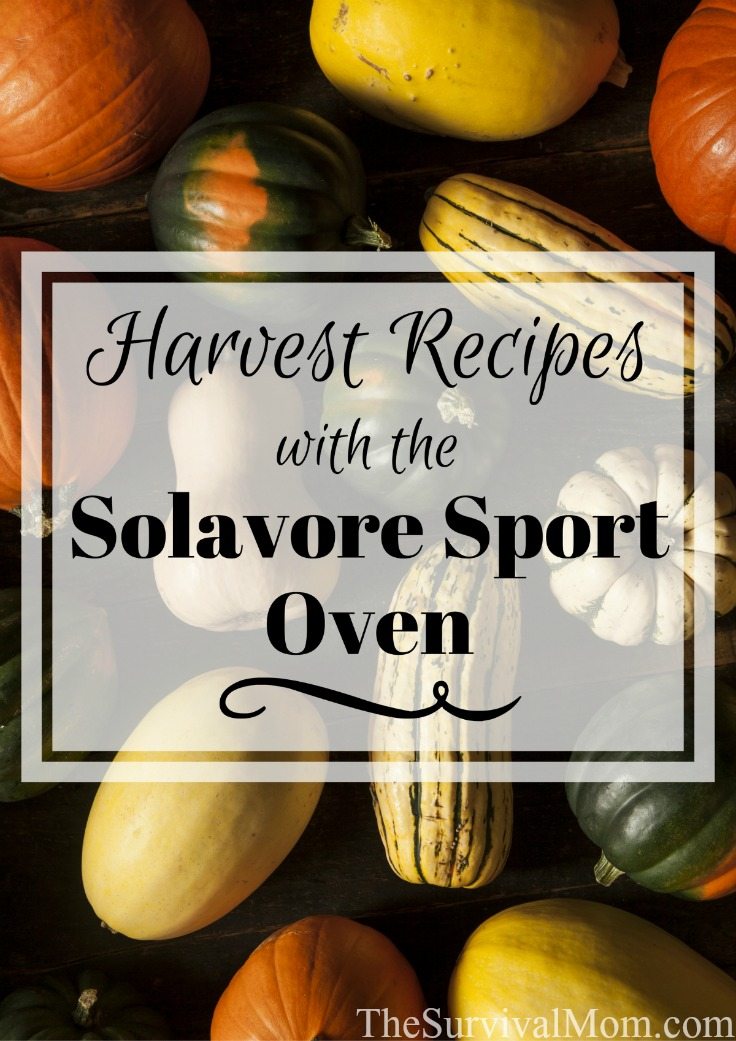 Now that my garden is finishing up for the year, I’m busy cooking  wonderful fall recipes using my home grown squash. For something a little different, I decided to try spaghetti squash in my Solavore Sport Oven. This month during National Preparedness Month, Solavore is offering a discount of $40 when the Solavore Oven and reflectors are purchased together. To get this discount, be sure to use coupon code preparedmom! (More details at this bottom of this recipe review.)

I preheated the Solavore for a half hour while I was preparing the spaghetti squash. During just a half hour or so, the oven had already heated to 270 degrees on a day that was mostly sunny and a bit breezy. 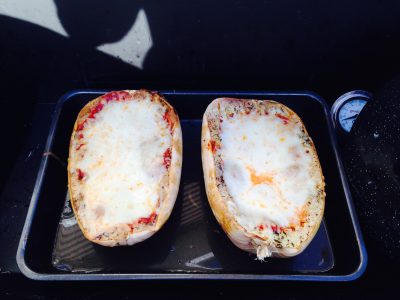 Inside myhouse, I sliced my spaghetti squash in half and removed the seeds. (I save all the seeds for the chickens). I rubbed the squash with extra virgin olive oil, then sprinkled some oregano, garlic salt, onion powder, and my own homegrown, dried basil. I sprinkled both halves with a little salt and pepper and then put the in a baking dish, covered with 2 round black lids.

I had some errands to run and came home 3 hours later. The squash was cooked all the way through and the smell was intoxicating! I drained the extra juice that pooled in the middle of the squash halves. Then I filled the cavities with a store bought marinara sauce, topped each half with 4 ounces of grated mozerella cheese, and popped them back into the Solavore. An hour later the sauce was hot, the cheeese was melted, and it was ready to eat. The cheese melted so nicely, that it looks like it came out of a conventional oven. A nice feature of the Solavore is that food is always kept moist. Nothing gets dried out. This was a mouth-watering meal.

Baking acorn squash in the Solavore

My next garden harvest dish was acorn squash. I also had a new variety of acorn squash from my garden called “Heart of Gold“. I wanted to compare the two varieties, so I cooked both in the Solavore. 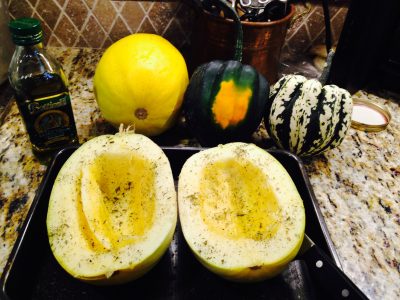 I split both the squashes, and removed the seeds. Then I rubbed butter inside and on the exposed areas of the flesh. I put about 1/3 cup of brown sugar in each half, and topped with a tablespoon of butter. I put the squash havles in the Solavore, and let them cook for a few hours.

I was concerned when the sky clouded up and the day became  mostly cloudy, and I wondered if the squash would cook through completely. I figured that I would just let it cook all day and hope for the best.  In the meantime, I picked 90 pounds of grapes at my Mom’s for winemaking. 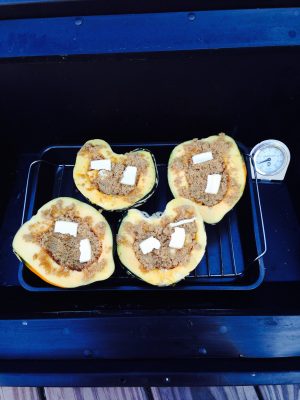 Well, my squash did cook completely through, but in all my preparations, I forgot that squash makes a lot of water. They were overflowing with butter and brown sugar everywhere. I should have let them cook first, drain the excess  juice, and then add the brown sugar and butter toward the end of the baking time. In spite of this, it was very good, and I shared it with my Mom and sister. 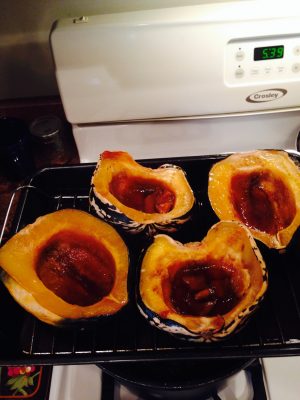 The acorn squash had a little more intense flavor, while the Heart of Gold was creamier and milder. I think next time I may add some raisins to the middle for a little more flavor. I was also glad these squash have great health benefits. They offer plenty of fiber, the soluble type, which is good for regulating blood sugar and cholesterol. There’s folate, calcium, magnesium, potassium, and Beta Carotene, too! I always say “Food is Medicine”.

My last dish was going to be wild game, but right now I’d be limited to squirrels, and I’m out of 410 shot. So, I improvised and decided to make Cornish game hens with wild long grain rice. I decided to pretend it was grouse or quail! 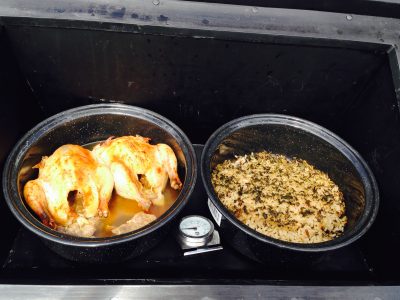 I basted  the birds with melted butter, then added onion and garlic powder, and topped with paprika. I popped the hens and some rice into my baking dishes, the ones that came with my Solavore, then into the Solavore, put the whole thing in my car, and drove to our town’s annual Labor Day parade.  I set up the Solavore next to my lawn chair along the parade route. I had quite a few people ask me what is that thing??

I did take time to explain, and people genuinely seemed interested. After 2 hours, the rice was done, but the Cornish hens were not. By this time, it was time to head home, so I packed it up and set up the Solavore on my deck. Then, the day became cloudy and was only partly sunny from that point on. So, once more, I just let it cook, nice and slow. The Solavore still managed to maintain a temperature of 230 degrees, which is hot enough to get the job done.

Later that afternoon, everything was done and I could smell baked chicken wafting from the unit. All the juices from the hens made a delicious gravy. The best part was that since it was 87 degrees out, I didn’t have to heat up my kitchen to have a great meal!

So, once again, I’m impressed with the Solavore Sport Oven, and how easy it is to take anywhere. I had no problem loading or unloading the unit from my Jeep. It’s never hot to the touch on the outside, so you won’t ever burn yourself. I think this unit would be invaluable if our power grid went down due our aging infrastructure, terrorism, or an EMP attack. This is one of the best proactive ways of helping your family should disaster strike.

More about the Solavore discount

Get both the Solavore Sports Oven and the reflectors for $229 and save $40 over the regular price of $269. In addition, you’ll receive:

Be sure to use preparedmom to get this discount when you place your order here. This discount runs through the end of the month.