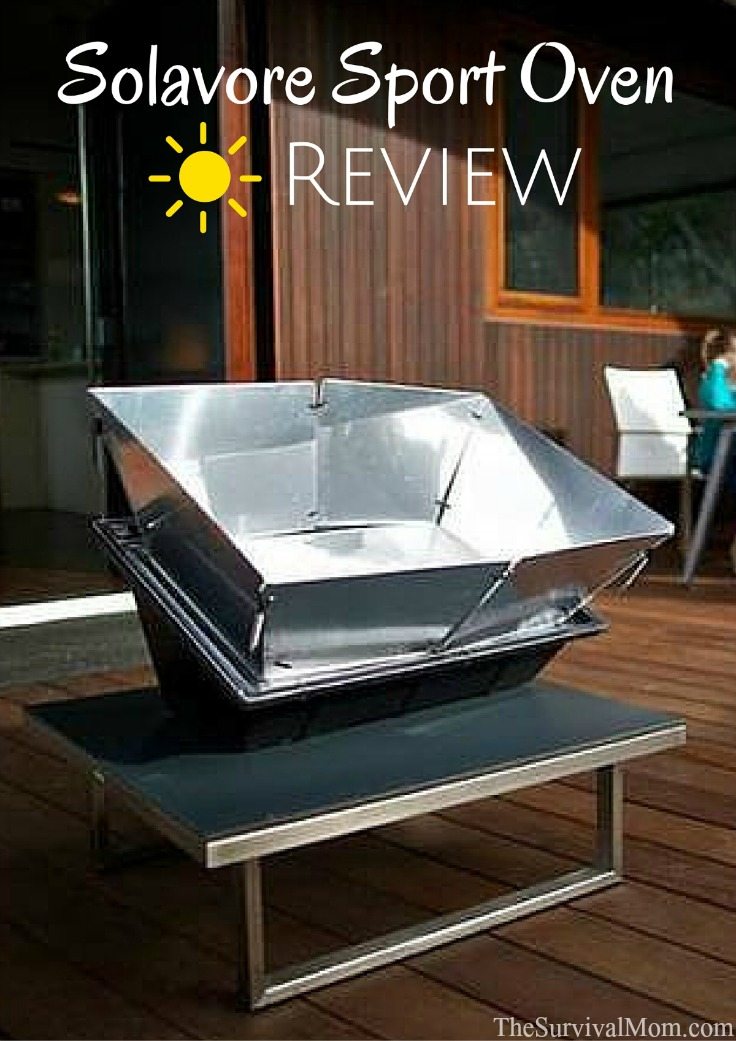 I have been using the Solavore Sport Oven for the past month and had an opportunity to review this product.

When the unit arrived, I noticed that it was lightweight, and it was easy to put all the “parts” together. This is just a matter of putting together 3 pieces: the black oven itself, the plastic top, and the reflector panels, which line the oven. It came with a WAPI stick to confirm you have achieved water pasteurization, which is a handy survival tool to have on hand. Since the easiest test of all is the heating of water,  I thought I’d try that first as part of my Solavore review. The weather was optimal, because the sun was out, it was around 45-50 degrees, but breezy.

I put cold tap water in my quart Mason jar, and suspended the WAPI stick so that it remained in the center of the jar. Then I placed the lid on, and reflector panels. I went to do some outdoor work and checked on it 30 minutes later. The interior temperature of the Solavore was already up to 220 and there was some condensation on the inside of the oven’s lid. The wax in the WAPI had already flipped from one side of the tube to the other end, indicating the water had achieved pasteurization. Since the water was nice and hot,  I used it to make a pot of hot tea!

Main dishes in the Solavore

Next, I wanted to try a main dish, so I decided to make Chicken Cacciatore. Weather conditions were in the mid-fifties, sunny, and breezy. I started with four large partially frozen chicken breasts. I placed two in each black enamel pan and added a quart of store bought spaghetti sauce, fresh basil, and garlic. I put the lids on and placed them in the oven. After an hour or so, I could actually smell the chicken, but I didn’t want to open it up and peek. I didn’t want to risk losing the heat that had built up. I did occasionally rotate the oven for optimal sun.

After about 4 ½ hours later, I had to check it, because of how good it smelled. To my surprise, it was completely done. The chicken was tender, juicy, and it easily pulled apart with just a fork. (I made my pasta on the stove, because the unit was full of my Chicken Cacciatore.) I plated it up, and added parmesan cheese. The slow cooking had infused the sauce and chicken with the basil and garlic. It was delicious and my family loved it.

The next time weather permitted, I made two pans of bratwurst and onions for some company I was expecting. The brats were defrosted, and I placed them on top of the sliced onions, and into the Solavore. Weather conditions were full sun, low 60’s, and breezy. This time it only took 3 hours for it to be fully cooked and BROWNED, which I didn’t expect. I didn’t realize how much water onions contained, because I had quite a bit of liquid at the bottom of the pan. It looked more like soup, so I drained it, and it was fine. I served it with hot dog buns, and everyone raved about it.

A few days later, I went to my mom’s for the day to mow her large property. I thought I’d get the meal started before leaving, and then get to work on her yard. This meal was two pans each of a 3-pound, mostly frozen chuck roast, pound of halved potatoes, and a pound of mini carrots. No water was added. Weather conditions were favorable that day with full sun, 60 degree temperatures, and breezy.

LEARN MORE: You can read all about the Solavore at their website.

I put the Solavore in full sun at 10:30 am, and stopped at 2:00 to check it. It smelled good, but when I lifted the lid, I knew it wasn’t going to be ready for dinner. I ended up quartering the roasts, mixing all the contents, and put the lids back on. I checked again at 5:30, and it was completely done. It smelled heavenly, was nicely browned, and everything was simmering in a tasty broth. The meat had fallen off the bone. My dogs were happy to get those!

Solavore cooks up a great dessert

Lastly, I wanted to bake something to see how the Solavore performed in that capacity. I decided to make a Pineapple Upside Down Cake. First, I put a stick and a half of butter in the pan to melt. Then, I  added  brown sugar, pineapple rings, and maraschino cherries. I mixed up a store-bought yellow cake mix, poured it over the top, put it in the oven, and then drove it to work!

I placed the oven in the parking lot where I could see it. It was about 60 degrees outside, mild, but 50% cloudy, so I left the reflector panels on it. About 3 hours later, I checked, and the cake was golden brown. It smelled just like warm pineapple. I inverted the cake onto a tray and was amazed at how pretty it looked. It tasted just as good if not better than a conventional oven. I think the moisture stays in the cake instead of escaping and you can really tell the difference. I noted that the cake rose properly, and the bottom wasn’t burned. It was truly remarkable.

After trying out the Solavore Sport Oven, I am impressed with this product. It is very versatile, and can really cook anything. I can make enough food for 8 people, maybe more if you include kids. I also researched the price, and found it retails for about $229.00, which is significantly lower than other brands.

My top heat was 250-260 degrees, which was sufficient for any of the food I made. When I made the chuck roast at my mom’s (Hi Mom!), I drove home with the meal in the oven, and it retained the temperature, so my food was still piping hot 20 minutes later. I like the fact you can quickly pasteurize water. Even on a mostly cloudy day, its easy to get the WAPI to 150 degrees.

The only thing I did to improve the unit’s efficiency was to prop a tree branch under it during afternoon hours to catch more of the sun. Overall, I  give the Solavore Sport Oven 5 out of 5 stars for:

Thanks, Solavore for a quality product. The company provided me with an oven but in no way attempted to influence my review. 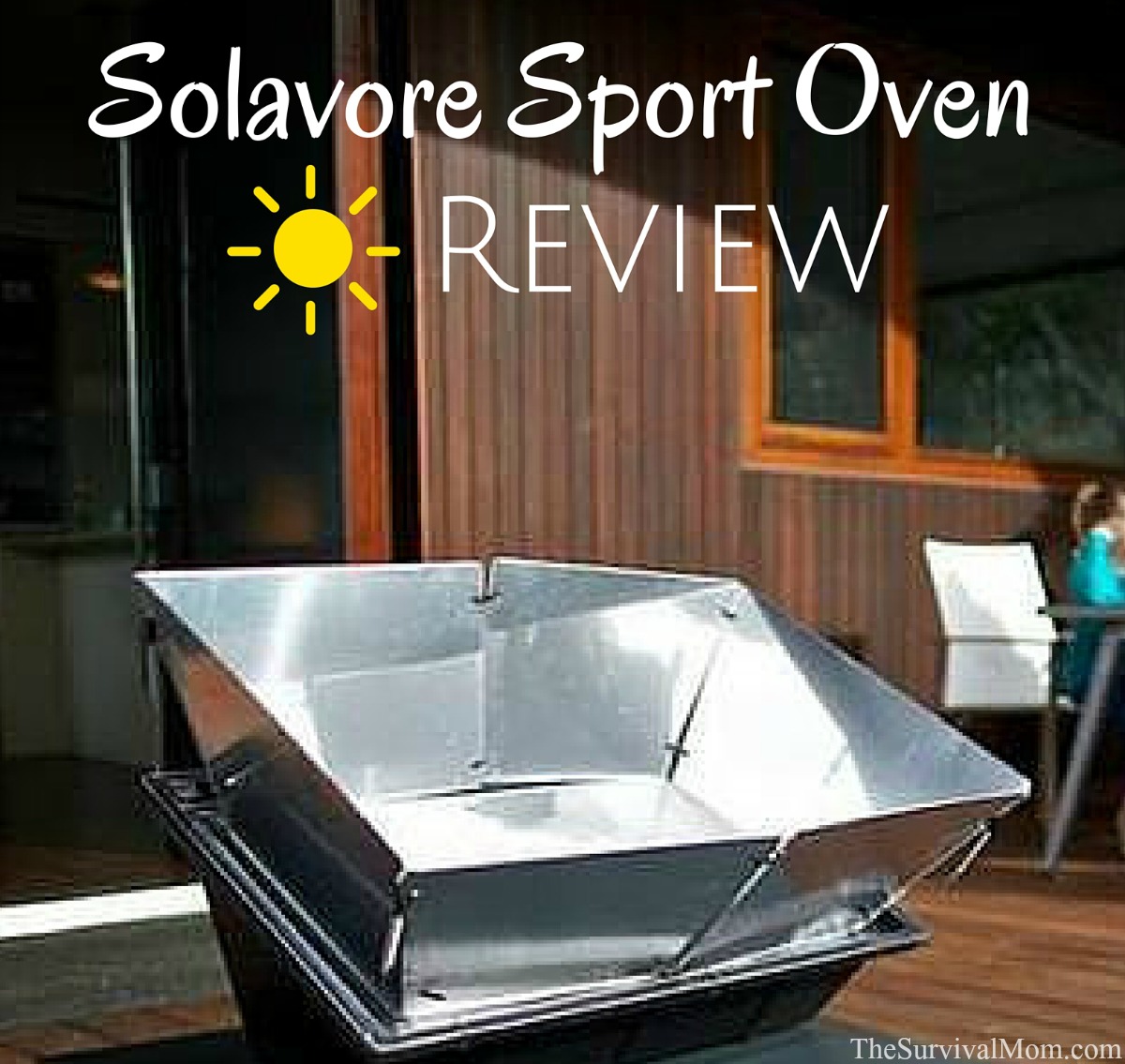