23shares
Some of the links in this post may contain affiliate links for your convenience. As an Amazon associate I earn from qualifying purchases.
This is a sponsored post brought to you by Smoke Shield. The opinions are my own based on my research and the transparency from Team Smoke Shield.
“Nine years ago, I had been very sick with a fever so that night I was sleeping on the couch. Off and on I would wake and think I smelled something burning, but I just thought neighbors were burning fires late.
Eventually, around 2 in the morning part of the electricity in the living room went out and it woke me. I realized it was hazy as well.  I honestly thought the hazy effect was due to my high fever (105) but I went and woke my husband because I was confused. I told him half the electricity went out and it seemed hazy or smoky. He said to call 911! I said do you really think we need to?” 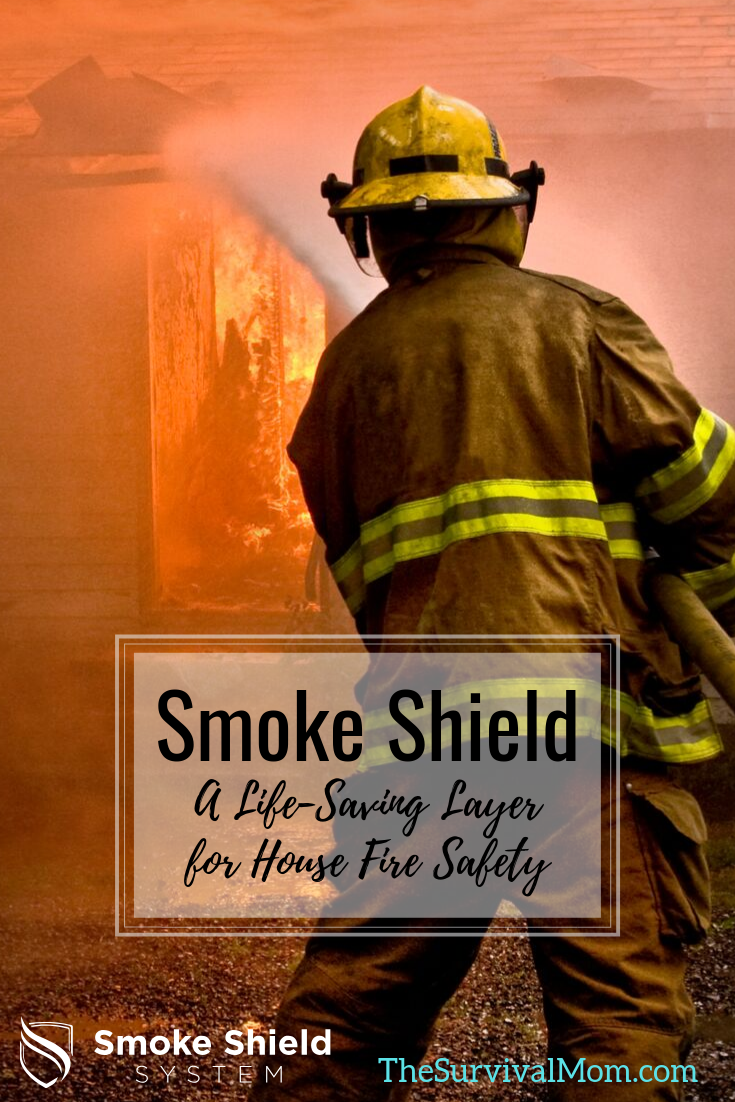 Rose’s true story is so typical of the average house fire. It’s such a shocking event that no one is truly ready for and often, normalcy bias sets in. Normalcy bias reassures us that everything is just fine, and in Rose’s case, she was mostly confused as her brain tried to figure out what was happening around her.
And, it’s not surprising that this house fire began at night while the family was sleeping. In fact, being asleep is the #1 human factor in house fire fatalities. In Rose’s case, not only was she asleep but she was dealing with an illness that had left her feverish and in pain. Some sort of physical impairment is another major factor in house fire fatalities.
Rose continues, “My husband called 911 while going outside to look around. He saw flames coming through the roof over the kitchen. He ran in and grabbed our two older kids from the upstairs, and I got the baby and the toddler out. I remember throwing my son out on a blanket in his undies.
It was so interesting looking back because we had never really discussed what to do, but we seamlessly split up and effectively got the kids out. We have always been like that though.
I walked into the kitchen there were flames shooting through the lights. I remember thinking, oh it is electrical. I need to turn off the light, and in my feverish state I walked under the flames and switched the light off. Then stood there wondering why it did not work. Thankfully my hubby Bill came and grabbed me and we went out to join the kids. About that time the firetrucks pulled up and the smoke alarms started going off.”

What happens when smoke alarms fail?

Smoke alarms are the first important layer in house fire defense, but they are also susceptible to malfunction and dead or dying batteries. In Rose’s case, if they had relied solely on their smoke alarms, her story may have had a different ending.
With young children in the house, we can teach them what to do when a smoke alarm goes off and different ways to get out of the house, but in the panic and chaos of an actual fire, they may be too fearful to do what they’ve been trained to do.

Dr. Nick Welch, the creator of Smoke Shield, told me, “If a child opens their bedroom door and sees fire and smoke, instinctively they will shut the door. This is a great instinct as it creates another smoke (though not impermeable) and fire barrier which inherently improves their chance of survival.

You see, the gypsum (sheetrock) standard in all homes has a 30-minute burn rating and has two layers for an hour burn rating. All modern interior doors have a 30-45 minute burn rating. So by simply closing the door you almost eliminate their likelihood of dying by the fire itself.
Now if they go into the closet and shut the door, that doubles the time they are safe from the fire, but that does not apply to smoke. As I mentioned, shutting these doors will slow down the spread of smoke into those rooms but the smoke can seep in around the door framing fairly quickly and consume a room. That’s where the Smoke Shield system comes into play.”
As a Navy and Iraq war vet who was certified as a shipboard firefighter, Nick has spent 8 years as a volunteer firefighter and is an emergency medicine physician. He’s uniquely qualified to discuss fire safety and the need for protection from smoke inhalation.

What is Smoke Shield?

I first learned about Smoke Shield when I was contacted by Team Smoke Shield who explained the purpose of the new product and that it was going to be crowdsourced.* I read their website, watched the videos, and was impressed by both the innovation of the product and the need for something like this on the market. I agreed to share their information with my readers.

You see, the purpose of Smoke Shield is to provide safe shelter in a worst-case scenario — not being able to escape the smoke and flames of a house fire. The device is installed in a closet or very small room and activates once it detects smoke in the house. It immediately begins to filter the smoke-filled air, providing safe breathing air within the confines of that closet.

Of course, escaping the fire by exiting the house or other building is absolutely and without question the first step to take, but as I thought about Smoke Shield and this type of scenario, I realized that in many households, easy escape may not be possible.

In these scenarios, having Smoke Shield installed in a strategically placed closet may be the back-up that provides not only peace of mind but also that last-chance survival opportunity.

Dr. Nick provides more in-depth information about Smoke Shield, house fire safety, answers loads of questions, and explains what crowdsourcing is. I encourage you to watch this for the invaluable tips he provides throughout our conversation.

Smoke Shield and the safe-room

Once you and your loved ones are in the safe room, Smoke Shield has been activated and is already filtering the air. Allow the device to do its job while you sit on the floor and breathe the safe air. Smoke Shield will provide that air for up to an hour. This gives firefighters an expanded window of time to find and rescue you.

Smoke Shield comes with a strobe light alert you’ll place on the outside of the closet to help firefighters find you more quickly. As the Smoke Shield project moves forward, a goal is to include the capability of communicating with firefighters when they arrive at your home.

Dr. Nick also mentions that adding a phone jack inside that closet will provide you with yet another layer of protection. You’ll be able to call the fire department, a neighbor, 911 and give information about your situation and even guide firefighters to your specific location.

Remember the normalcy bias I mentioned earlier and the panic and chaos that is part of every house fire? Dr. Nick says, “When you’re afraid, everybody’s stupid. You’re not thinking logically and deliberately. We designed this system so that even when you’re afraid, you can dramatically improve the likelihood of survival.”

“Now we talk with the kids about where to meet if something happens and safe ways to get out of the house. They are older now but the younger 2 still get really scared if I accidentally set off the smoke alarms.

And my husband and I have major anxiety about smoke smells. We always check outside and inside because of the experience we had. In a way the fire made me lose my sense of safety. Usually, people feel safe in their own homes, but now I feel like walls are so thin that they really won’t hold much out.
We lived in that house another 8 years and spent nearly every night checking for fires. We did find out that fire was caused by old electrical wiring.”
Steps to take to keep your home safe
Dr. Nick emphasizes the need for strategically placed smoke alarms and fire extinguishers and the need for every family member to recognize the sound of the smoke alarm and know different ways to exit the house.
Read my review of Smoke Shield and how it can save lives in a house fire. @SmokeShieldLLC #housefire Click To Tweet
Smoke Shield adds yet another layer of safety in the worst-case scenario of not being able to escape because of physical disabilities, mobility issues, young children and infants who may not be able to get out for any reason, and special needs loved ones.
Go to Smoke Shield’s Indiegogo website to learn more about the product and, until supplies run out, to get a Smoke Shield at 40% off for Survival Mom readers. This is an extremely time-sensitive offer. Not only will you receive a device or two for yourself, but you’ll be helping a worthy product meet a financial goal that will help it reach a larger market.
If nothing else, review your home’s smoke alarms and check to make sure their batteries are functional. Place a fire extinguisher in your kitchen, the source of most house fires, and instruct everyone in the family how they should escape if the alarms go off or if they ever see and smell smoke or flames.
Learn more about Smoke Shield and assess if it’s something your family needs, and take steps today to protect your home and loved ones from a house fire. It’s something everyone can do.
*Dr. Nick explains what crowdsourcing is at the 1:06 mark in the video. (The one hour, six-minute mark.)
23shares