Skip to content
29 shares
Some of the links in this post may contain affiliate links for your convenience. As an Amazon associate I earn from qualifying purchases.

One of the best things about summertime is sitting on your front porch with a nice, cool, fruity drink in your hand: lemonade, watermelon smoothies, or even some old-fashioned soda pop. Lately, a different kind of drink has become quite popular in some circles: the shrub. I decided to experiment with making a cherry shrub. 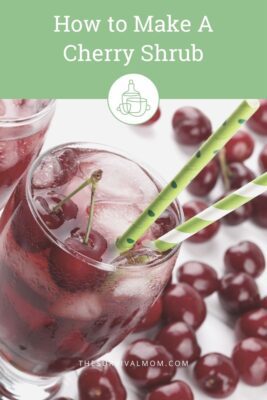 I must clarify that I am not referring to a short bushy plant used in landscaping and the subject of Monty Python jokes (oddly enough most articles on shrubs always seem to mention Roger the Shrubber in some way or another.). Oh, no. I’m referring to a tasty, fruity non-alcoholic vinegar drink.

If you have never heard of a shrub, or tasted a drinking vinegar before, you might feel skeptical. That’s fair; I was skeptical at first, as well. Drinking something -on purpose – that’s mostly vinegar doesn’t sound like my idea of a good time, no matter how much sugar or fruit or whatever is in it.

It wasn’t until a friend of mine tried some at a Colonial Heritage Festival and swore up and down how good it was that I thought to reconsider.

A Brief History of Shrubs

Shrubs have been around for a long time and were very popular in 17th Century Europe and in Colonial America. At that time, shrub syrup was made by steeping fruit (usually berries) in vinegar for a period of time as a method of preservation.

Modern shrubs are made slightly differently, but nonetheless, I always enjoy these older kinds of recipes because trying them out feels like a discovery, a way of reconnecting with the distant past.

READ MORE: Connect with the past by collecting and reading old cookbooks! Here’s a list of reasons why this is a great idea.

I’ve never been much of a drinker, but I really like fancy beverages. When I heard about how easy it was to make shrubs at home, I gave it a whirl.

It’s cherry season, and since I’ve already done cherry jam, cherry preserves, and cherry pie filling, I decided to do something a little different. Cherry shrub syrup appeared in my fridge.

But then I thought, why stop there? Since shrub syrup is so easy to make, why not make a variety of shrubs?

READ MORE: For other unique ideas for cherries, check out 7 Delicious Things To Do With Cherries.

Shrubs are a good way to use up fruit that’s past its prime.

Shrub-making is an excellent way to use any fruit that might not be quite at its best.

I had some iffy-looking nectarines in the fruit bowl on my counter, so I made a nectarine shrub.

And I had some freezer-burned strawberries in my freezer, so I made a strawberry/ balsamic shrub.

The mint I had growing in my backyard didn’t have anything wrong with it, per se, but I made a lemon-mint shrub with it anyway. In addition to the citrus flesh, peel the zest and add that to the mixture, as well.

The simplicity and versatility of something like shrub syrup lends itself to all kinds of possibilities, including the occasional “adult beverage“, if you’re so inclined.

How To Make A Fruit Shrub Syrup

The really appealing thing about shrub drinks is how easy they are to make.

1 cup fruit, roughly chopped. Stone fruit should be pitted, berries or cherries can be lightly crushed.

1 cup sugar (plain white granulated sugar is easiest, but you can experiment with brown sugar) 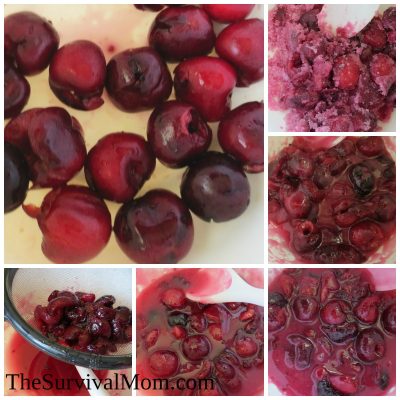 Combine your fruit and sugar in a bowl. At first, it will look rather clumpy. Keep it in the fridge for a day or two, taking it out every so often for a good stir. The sugar acts as a desiccant, and will draw out the liquid from the fruit.

When it’s ready, your concoction will begin to look like fruit floating around in syrup.

Sometimes this will take a day or two, or the process could take only a few hours. The graphic on the right shows the progression from plain cherries to your shrub syrup, moving clockwise. Strain with a simple wire mesh strainer into a separate container, and add your vinegar. Voila! Done!

Hot Tip: Save the sugared fruit! It makes a great addition to plain yogurt or oatmeal or can be eaten straight as a snack. Especially popular with children.

Your shrub syrup will keep in your fridge for several months. If it becomes slimy or looks like it’s beginning to ferment (watch for signs of bubbles!), discard it immediately.

For best results, wait for the shrub to mellow in the fridge for a few days before using. This will allow the sharp vinegar flavor to meld with the fruit and sugar.

Serve with club soda, still water, or, if you feel like it, use as an ingredient in the cocktail of your choice. Two to three tablespoons of shrub syrup are more than sufficient to flavor a full-sized glass of club soda. 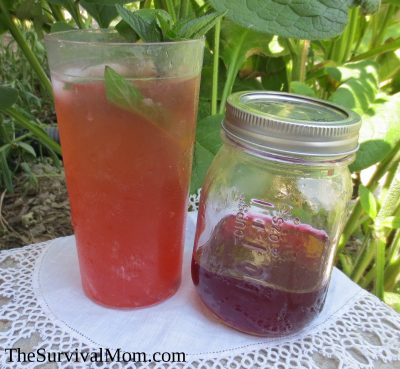 As a word of warning, not everyone I’ve met likes this kind of drink. My husband thought I was playing a joke on him when I handed him a glass of nectarine shrub, and a friend of mine politely declined her invitation to taste it at all.

My older kids disliked the flavor immensely when I used a little of balsamic vinegar in addition to the apple cider vinegar. However, my 3-year-old likes it a lot.

Even with concerns that the acid in the vinegar is probably not the best for your teeth, it’s not any worse than soda pop or Crystal Lite, and has a lot less sugar, too. If you’re concerned about the effects of vinegar on your teeth, just rinse your mouth out with water.

On the whole, I found the fruit shrub drinks from the original recipe to be a little too vinegary for my taste. As an intellectual exercise, I made another version of the cherry shrub, this time using more fruit and less vinegar. The resulting drink was much better received by all parties, and I liked it better myself.

I call it the “Crystal Lite” version, because the smaller amount of vinegar adds just enough tartness to bring out the sweetness of the fruit, but not enough to make you question why you thought drinking vinegar was a good idea in the first place.

It probably is some kind of testament to our sugar-obsessed society that my kids liked this version so much better. Perhaps it isn’t very traditional, but I can’t seem to feel bad about it.

Lime wedges and/ or mint sprigs, for garnish (optional)

Use the same instructions as above. This version of the shrub is much more reminiscent of a regular soft drink, particularly when served with club soda. However, it has much, much less sugar than traditional soda pop, and uses no artificial colors or flavors.

If you’ve ever tried making a fruit shrub syrup, what kind have you tried?

6 thoughts on “Cherry Fruit Shrubs: How to Make This Yummy Blast from the Past Summertime Drink”