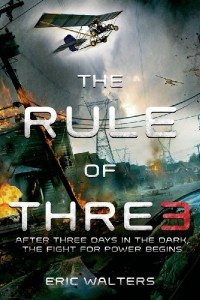 Like many preppers, I’ve long been a fan of disaster (dystopian) novels. Any book detailing the end of the world gets my attention. Lately, there have been quite a number of great disaster novels coming out of the Young Adult (YA) market, like The Hunger Games.

For those not familiar, YA books are typically geared for the teen crowd. As such, graphic violence is not usually present, nor explicit sex. That’s not to say, though, that today’s YA books are full of Nancy Drew or Hardy Boys wannabes. Often, in my experience at least, YA novels have just as much drama and realistic character portrayals as those novels marketed for older readers, they just have younger protagonists.

Another such book is The Rule of Three by Eric Walter. It is the first in a planned trilogy. The main character is 16 year old Adam Daley. As the story begins, he is at school, helping a friend with a project when all the lights go out. He, his fellow students, and the school staff quickly realize this is no ordinary power outage: All their cell phones and most of the vehicles in the parking lot are inoperable. Savvy readers will immediately recognize the nature of this crisis – electromagnetic pulse (EMP).

Adam’s car is old enough that it still works. He picks up his siblings from school and heads for home. Their mother is a captain in the local police department and their father is a commercial pilot who is out of town at the time of the crisis. Their next door neighbor, Herb, is a nice old gent who turns out to be quite a valuable asset.

It doesn’t take long before polite society begins to break down. There are riots at the grocery stores and such. Some of this behavior is quelled by Herb’s use of excellent conflict resolution skills. I found this approach to be quite refreshing as in many similar stories it would have been a case of violence meeting violence.

As time goes on, Adam’s neighborhood becomes his entire world, for all intents and purposes. Walls are built, patrols are set up, and the community comes together for their own protection. An interesting facet to this story is Adam’s ultralight: a small homemade plane Adam and his father built in their garage. Adam’s knowledge and skill with piloting the craft gives the community an edge over the competition.

Being a YA novel, there is naturally a bit of romance present. It comes in the form of Adam’s crush, Lori. While it doesn’t detract from the story at all, I did find this subplot a little too convenient compared to the rest of the story.

I will warn you that The Rule of Three ends with more than a couple of plot threads left unraveled. But I can assure you the next book picks up right where this one leaves off.

The Rule of Three is, hands down, one of my favorite fiction reads in the last year or two. Very well written, it is quite a page-turner.