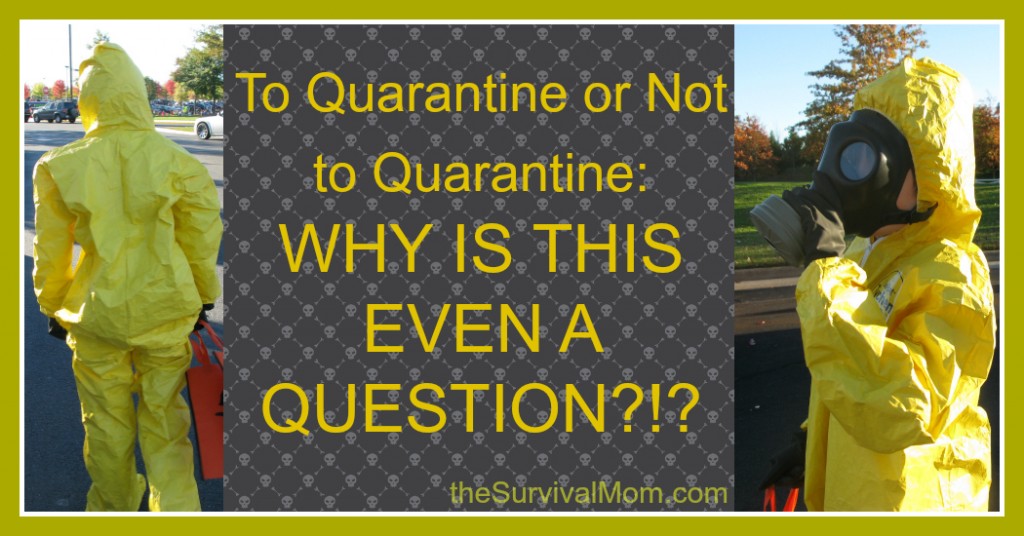 Frankly, people make me wonder. I get that we all want to be nice to others, and we all think “I won’t get sick” when a virus is going around. But Ebola is no joke. Catching it isn’t an inconvenience, and there really is no room for taking chances with anyone who has been around Ebola.

Who should be quarantined?

Realistically, most of the carriers are people who knowingly put themselves at risk or who are trapped and cannot get to safety. At this point, most Africans have been told how it is transmitted. Because these nations are so hard-hit and the virus so wide-spread, these entire nations and those who visit them need to be quarantined.

Health workers who, God bless ’em, choose to put their lives on the line to help others, cannot be exempt from the same rules that apply to everyone else. If anything, they should be under stricter quarantine because they had greater potential exposure.

They should probably be transported home on troop transport planes used for nothing else that can be stripped and sterilized in a way that commercial planes cannot because of the differences in materials. Uncomfortable? Yep. But if our troops can live with it, so can they. It’s gotta be more comfortable than some of the places they volunteer. After all, it’s only one flight, and they have taken oaths to help others, not put them at risk of catching such a horrible disease.

So what has my knickers in a twist about this? The nurse, Kaci Hickox, who landed in New Jersey and has gone home to Maine, and the Manhattan doctor, Craig Spencer, who came back from helping in Ebola stricken areas. Both have taken oaths to others and are very public about their “selflessness” in volunteering to help in Ebola-stricken areas, but both have shown absolute self-centeredness in their refusal to follow quarantine procedures.

To be fair, the Hickox airport quarantine was done in an unacceptable manner. Taking her phone? Denying her even a TV to watch? Giving her  bucket for a bathroom? All when she was asymptomatic? Not OK. But realistically, it was a knee-jerk reaction because just a few days earlier Dr. Spencer chose to go wandering all over the city when he was symptomatic! It was also a rush-job when she seemed to have a high temperature upon arrival at the airport. Hickox has now had days to cool off. Instead of continuing to talk about how she won’t cooperate with a voluntary quarantine, she could be doing something useful, like working with government officials to develop more realistic guidelines.

There are times Americans are hated throughout the world because we seem so utterly self-absorbed. Much of the time, I think it’s more than a bit unfair. But sometimes, if we’re honest, we deserve it. Kaci Hickox and Craig Spencer exemplify that self-absorption.

My heart hurts for those African families they went to help because many are forced to make a choice no one should ever have to make. They are forced to choose between helping their loved ones and staying safe themselves. They are choosing to carry sick people to the doctor and care for them as they die when no doctor is available, even understanding the risk to themselves. Most would choose to use safety products like the suit in the image above, gloves, masks, etc. – if they could get them.

Even more are dying because the disease has badly damaged their economy and there is not enough food. And some tried to leave while healthy but didn’t make it out in time and now they are trapped, even though they knew the danger.

These people are being given the option of “voluntary quarantine“. It’s kind of like house arrest versus going to jail. They get to stay home, watch TV, sleep in their own bed, have snacks, take nice tub baths, whatever. But they have to stay inside and not be in physical contact with anyone else.

First the NBC news anchor, Dr. Nancy Snyderman, who refused to remain quarantined, then Spencer, and now Hickox are all refusing to comply. All three are medical professionals. Is their assessment of no risk correct? Perhaps, but it doesn’t really matter. Spencer at least was clearly wrong. Either way, they need to follow the rules, and they need to be an example to others, especially as we are learning that we don’t know all there is to know about Ebola.

It will be a minor miracle if Spencer didn’t infect anyone. We all get cabin fever, but the man was symptomatic and went around such a large area of Manhattan running, riding a cab, taking the subway, visiting tourist spots, and just hanging out with friends that it wouldn’t be believable as part of a terrorist plot to spread disease in a novel! As a doctor, he knew enough to go for treatment and evaluation. Even if he didn’t think he was “that sick”, he should have stayed close to home. A walk around the block wearing a surgical mask (use a scarf to cover it – fall has started) and gloves would have endangered almost no one.

Hickox, who was forced into a terrible makeshift quarantine, has now gone home to Maine. Her boyfriend, a nurse in training, has broken quarantine to come see her. So how many will he endanger if she is a carrier? People are already cancelling appointments at her local hospital and she hasn’t even been there yet! Frankly, I can’t blame those patients as they hear about this dreadful disease and then watch as medical professionals behavior so carelessly.

African nations have established quarantines and will not let those from the three most affected countries into their nation. Other countries, including Canada, have enacted restrictions as well Does it keep them all out? Of course not, but keeping out most of them out is an effective way to reduce risk. Inviting them in, including for treatment, increases risk.

I’ll be honest. I’m sick of bailing out other countries, but this is the sort of thing no country can handle on their own. This is just the type of crisis that international agencies and other countries should work together to help solve.

I’m not happy about sending our troops there, but I would support sending a large group of teaching doctors to Africa to train others who can stay longer-term in treating this. I can understand the argument that doctors can’t afford to take off a month to work, and another three weeks for quarantine, but we shouldn’t be forced to accept the risk to our nation of allowing anyone to skip quarantine if they are exposed.

Having those who can’t give enough time for quarantine train others and possibly even consult using video-conferencing seems like a good use of resources and a great way to put their skills to work while allowing them to skip the additional three weeks of quarantine.

Would that be enough training? Realistically, Ebola aid workers don’t need a full medical training since they won’t be diagnosing and treating all kinds of ailments, but they need to know exactly how to handle this disease and anything else they are likely to encounter while treating it. And they need suits, gloves, medical equipment, medical supplies, and food.

We can send them those things and make a very real difference while maintaining a national quarantine.

So why is quarantine an issue?

In short, politics. If you say people should be quarantined because Ebola is contagious and dangerous, then you re-introduce the idea that some diseases are dangerous and anyone carrying, or potentially carrying, them needs to be quarantined for a set period of time for the public good.

As well, for those mired in politics, they can’t very well quarantine those coming here from West Africa who have been exposed to Ebola when there is little to no oversight whatsoever about what diseases may be coming here across the southern border. Politics trump common sense.

But what else will qualify for quarantine? Will the new respiratory virus that has polio-like symptoms coming in with illegals coming over the border from Central America qualify? Will a virus like Swine Flu that came in from Asia a few years ago? What happens to those who are contagious?

Having an Ebola quarantine could lead to immigration restrictions and health checks. And that is the real reason it remains a question, not a policy.

My Opinion is an occasional feature on The Survival Mom blog. It does not necessarily represent the viewpoint of other contributors or of the editor.