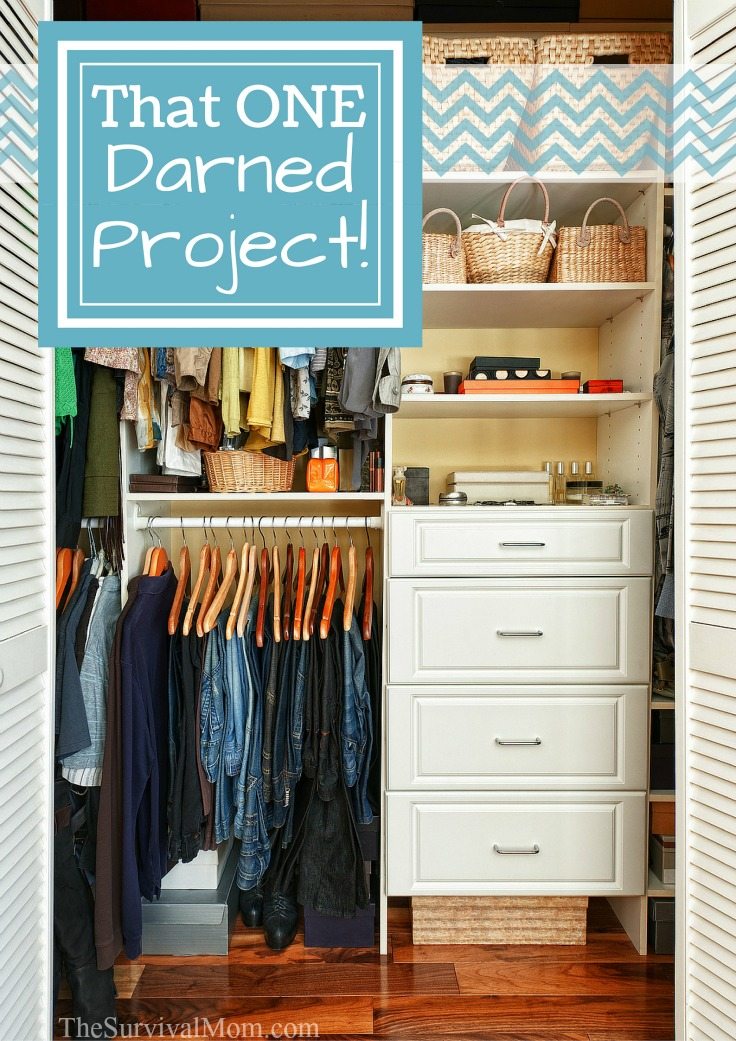 We all have one – a project that has been sitting there, half done, for longer than we want to admit. You may have more than one, and some may have come with the house, but there is usually one home organization project that stands out because it just annoys the beejeebers out of us that it isn’t done – or at least closer to done! – yet.

In our house, it’s the basement. I really, really want to enclose a big section of the room so my boys have a space where they can be crazy, insane, unsafe boys, and exercise. We have high quality pads for the floors – two 6′ x 12′ sections – and for a long section of the wall that will get a horizontal climbing wall. And they have sat down there for years, waiting.

To be more specific, they have been down there, waiting, since 2009.

So, what does this have to do with organization, the January Skill of the Month? The same thing your project probably does. To finish that space, a mountain of boxes, bundles, bits and pieces, and piles of things need to leave that space and get put away somewhere else. Contemplating that has always made me want to go hide, so I procrastinate.

This year, though, my parents took the kids for several days before Christmas, and I spent some quantity time in the basement cleaning, straightening, and, most of all, organizing. We had two new shelving units waiting in their boxes. As soon as it was assembled, one of them was filled with a mass of my husband’s things (car parts? tools? sports equipment? whatever – I kept it all together so he’s happy) that had been stacked up in the way in another part of the basement. With the extra room, I cleared out the first stack of boxes from the future boy hangout / exercise area.

I got my husband to move a heavy bag from the back to the exercise area. In the newly empty space, I fit even more of the boxes that needed moved out. And that inspired me to look more closely at some other boxes in that back area – my husband’s area.

His space, not my space

That is and shall remain his area, but some of those boxes have been untouched for years. Since its still his area, I tread with great caution when moving or organizing anything because it seems to make sense to him. That said, I cannot fathom any way in which moving things from a big half-empty cardboard box to a smaller one that just fits the items in the same space will mess up his system, so I (very quietly) do this sort of thing.

Nor can I see how combining two half-empty boxes of the same thing (car wax, chainsaw oil, whatever) is a problem. Heck, it’ll make it easier to know what he has! Right? And he hasn’t noticed, so far, when I do that, especially since I don’t move them far from where he had them.

Just moving things into smaller boxes and condensing how much empty space was around all those things freed up a surprising amount of space. Enough that I was able to fit his last few boxes into the area!

As I mentioned, there were two shelving units. The second one went where the two boxes containing the units had been because building them freed up that space. I had struggled with finding a place to put my son’s NERF guns that would keep him happy, and that wasn’t the floor. (Honestly, that was a big reason the room was so hard to get cleaned up and usable.) The rack ended up being the perfect solution!

What room or area is it that you truly, deeply dread? Is there a closet door you won’t open or a room you detour around? If so, you know where to start. Or does it seem like your whole house has turned into one giant home organization project? If that’s the case, pick a spot at random. Then….

Open the door and start.

Instead of running away and hiding, do something – anything! – to improve the situation. Most people seem to have at least one closet in this kind of situation. If you are overwhelmed, a closet might be a good place to start because (1) it’s hard to screw up a closet too badly, (2) small spaces are inherently cheaper / faster /easier to fix than bigger ones, and (3) it’s not a giant project, no matter how much it may feel like it. (Gutting the kitchen, now that is a big project!)

One of the spaces I hated for years is our linen closet. Due to unfinished remodeling by a prior owner, it had no shelves and everything was stacked on the floor. It took approximately $120 at the hardware store and two hours or so of work by my Dad to make it all better, after six years of irritation and avoidance. (Apparently, this bothered my Mom even more than it bothered me, which is why my Dad did the work.)

Once you have finished that, move on to something harder because you know you can do it. But remember: You don’t have to do it all at once! You can clear off the top of one piece of furniture as a first step. Another day, clear a shelf, chair, or end table. As long as you keep those spaces cleared, you will eventually have the entire room clear and can move on to cleaning, repairing, or whatever comes next for that space.

1. Even if your spouse has things they really, truly, deeply don’t want you to touch, you can still probably move them into smaller boxes – just don’t move them more than a foot or so from where you found them unless you are 100% certain they won’t notice and / or mind.

2. Sometimes, when you get started, you’ll find the solution you needed was already there – like the big shelving rack to hold my son’s NERF.

3. Doing one step at a time is OK. After we finished all of that and Christmas, I ended up sleeping for 14 hours straight one night to recover from all the lifting, shifting, and repositioning. Some of those big, heavy boxes were moved two or three times before I was done, but it all worked out in the end.

4. Not finishing the whole project can be OK too. We still don’t have the climbing wall up and usable, but we the boys used that space more in the month following Christmas than in the entire prior seven years combined, so it’s still a win!

5. Like Nike says, sometimes you really do need to Just Do It!

More resources to help you get organized once and for all! 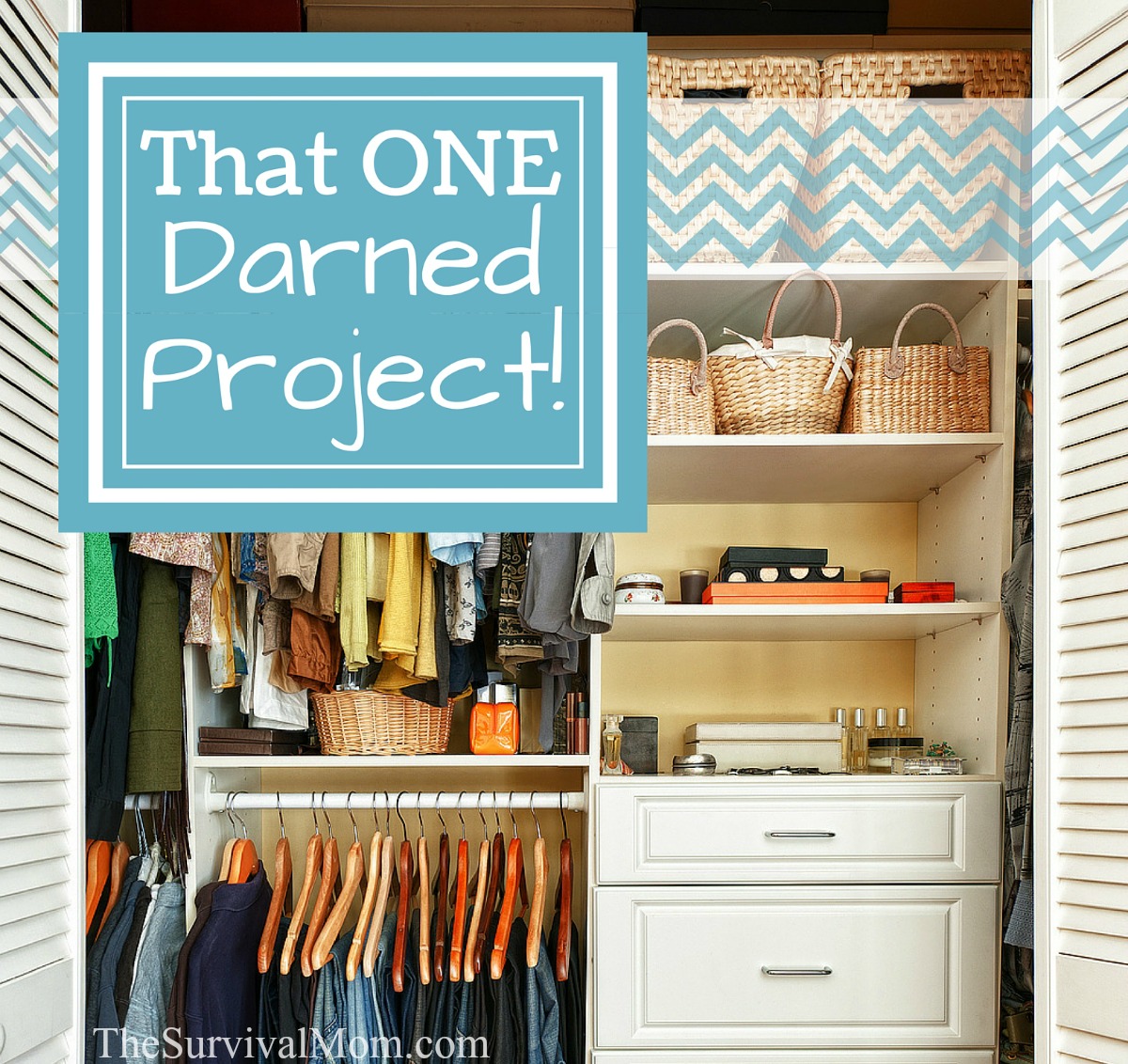