0shares
Some of the links in this post may contain affiliate links for your convenience. As an Amazon associate I earn from qualifying purchases.
Guest post by Ann Johnston.
I will first give you some brief things I went through in 1993 in West Des Moines, Iowa, then I wish to tell you what has changed my mind lately as I poo-pooed my husband with this survival stuff, what brought me back to taking a hard look at our future. 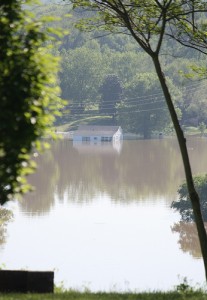 In July 1993, a raging river flooded old downtown West Des Moines. I had just moved in to my soon-to-be new house as a single mom. I had been recently divorced by my husband after 26 years. He was my high school sweetheart, and I thought we would be married for life. My little house represented a new beginning for my daughter and I. I had unpacked everything I owned and headed to the lake on July 6th.

I went to work that day at my salon a couple blocks away. My neighbor had warned me the flood was coming, but I said that I had to get to work. She just looked at me dumbfounded. I had asked about flood insurance when I was preparing to buy the house. The insurance man advised me against it since I had to be totally devastated in order to collect. I was just renting for a month til the abstract could be brought up to date, so no flood insurance.
It was business as usual at the shop. All the gals were busy as well. About mid-morning  some of my clients came in and starting packing me up and hauling my things at the salon to nearby garages with the threats of flooding. I just kept working. I was in total denial.
Many other business owners came in and convinced me to hurry and get my things outthe door. My crew and I evacuated what we could and hurried over to my house to put up plastic on the outside and put in the attic what we could. I had the car packed up with keys in it. I went up to help sand bag the river a block away only to see it break and come roaring towards my car and my home.
I had a friend take some of my things into downtown Des Moines to store. He and one of my employees had rode the motorcycle back to check on me. I was running towards my car screaming to the man that my keys were in it. He h 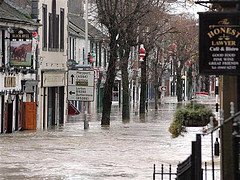 image by University of Salford

urried to drive it around the corner away from the raging water in time for me to escape two blocks.

I turned the one way that turned out to be the wrong way, with the river lapping against my tires and coming from the side streets on both sides of me. Thank heavens it was an uphill drive.  After six blocks the water still chased me up the top of a hill in my friend’s yard.
I was safe for the time being My friend and her daughter welcomed me and we went upstairs in her big house, watching the flood waters rise. We expected to have to evacuated any time. That did not happen. We were safe for four days.

Relying on family, friends, and strangers

I suddenly realized I was homeless with no clothes except the ones on my back and my business was full of water. The building that I owned had no flood insurance since there had not been a flood in Valley Junction in 100 years.
Once the water receded, I could go to my house to clean up. There I was inside and feeling devastated at the loss. Wood paneling had bent and bulged out like it was hanging on with a thread. I went in the kitchen, and everything was ruined. The washer, dryer, small appliances, and dishes covered in mud. I opened the basement door only to see the ugly river staring back at me. I was in shock. My brother broke open the window and was able to pump out the water. The house would never be the same.
Thanks to the Red Cross and their hot meals I got cleaning supplies and energy from their help in the neighborhood. People from several churches came to my rescue in cleaning out my home that I would ultimately say good-bye to.
One final thing was to clean out the garage. Thanks to a wonderful friend who lent me a pair of garden boots I was able to use a piece of plywood and scrape the much and mire and a hundred snakes out of my garage. It continued to rain for several days. The day I went up against the snakes in my garage and basement it was raining so hard that when I finished, I just stood under the eaves and let fresh rainwater wash away the bad memories
I was able to find a blanket to put over me. I walked for three blocks in shock looking for help at a nearby church were some people who fed me and let me to a phone bank where I called my son in  DC. The wisdom that came from this 19 year old son was like the balm of Gilead upon my bruised heart. He reminded me that I have faith and God was still there.
He convinced me to call an aunt and uncle, cousins, and nearby friends. Family, friends and strangers helped me rebuild my building. Churches donated money. Clients helped. The local lumber yard donated everything I could ever need. Bankers came and dry walled. Folks came from all over the United States when they heard that our little community needed help.
I applied to FEMA for aid two times. I was turned down because they thought I was too poor to pay them back. I was devastated to learn that all my careful monthly statements prepared by a trusted accountant firm had taken me for a ride, they made no sense.
A wonderful woman banker from my church believed in me and loaned me the money, not once but twice. I paid back the money in five years time. God was good. My business was back up and running. I sold the building after 10 years. I am still a hair dresser in Arkansas after 42 years. I
am still thanking God and all the people that came to help me survive 1993.

Preparing for something else

My husband has lately been involved with survival strategy. Given his involvement in 2 tours of the Vietnam war, he is somewhat of an expert on survival, to say the least.
I must say, I was not too keen on his purchase of guns and ammo. My brothers are very active hunters. I have enjoyed all wild game birds, squirrels, and rabbits. It was not until my husband Tom invited me to go to target practice that I decided to appreciate his skill and, surprisingly, mine at handling a gun.
I can remember so well the 50’s and beginning 60’s bomb shelters we prepared in our basement when ever we moved. Mom always had extra canned goods and a fridge and freezer full of meat, bread, most anything we would need in a disaster.
I still was not sold on the idea that we needed to get ready for an uncertain future. I finally gave in and freed up three shelves in a linen closet where we now have a start of supplies. I have agreed with most things Tom has planned for. I am excited about have a small piece of land we can grow a garden and make ready for any future events.
One day I was in the library at the building where I work. I had visited the library three times that day. I even laid out three or four books reading the backs to see the story lines. The third pass through the library on my break I had decided on a book. I stopped and said a prayer, Lord which one of these books should I read. I want a story with meaning. I was getting ready for some heart test and I needed to lay low for a few days.
Just when I thought I had found the book, suddenly my eyes fell on a book called the Last Light by Terri Blackstock. Noticing it was published by Zondervan, I knew it was a Christian based book. Once I opened the book it sucked me in to where I could not put it down. I laid three days of the Memorial Day holiday in bed reading and resting. One week to the day I started, I finished this book with a whole new perspective on survival.
I looked back to see when it was written, 2005, I was in shock. I learned so much from this book about the end of the world as we know it that it seems to have jump started me into a new awareness that has reshaped my life.
My new goal is to learn all about herbs for health and healing. I want to get on board and dig out my great grandmothers recipes for home remedies. I want to brush up on my gardening days from my youth. We canned everything coming from a large family and we had an acre garden.
I am diving in the Mary Jane Farm Girls magazine and others. I am looking forward to retiring in the near future. Before I do I plan to get the next three books in Terri Gladstock’s Restoration series. May God bless you abundantly today and tomorrow and beyond.
0shares