This news release was submitted by Mountain House.

ALBANY, Ore. – July 12, 2012 – Mountain House, the leading domestic brand of freeze-dried food, released the results today of a study designed to illustrate how different brands handle oxygen levels in their long-term food storage products. The study, conducted by Columbia Food Laboratories, focused on oxygen levels found in pouches of Mountain House freeze-dried foods compared to those of a competitor. 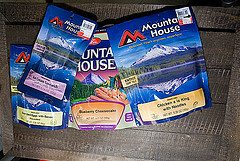 “For proper long-term food storage, it’s important to maintain oxygen exposure as low as possible,” said Lee Goin, laboratory director at Columbia Food Laboratories. “Oxygen causes rancidity in foods containing unsaturated fats. Even slight rancidity can make a food undesirable. Oxygen causes nutritional value to be lost, especially vitamins A, C, D and E. Removal of oxygen will kill any insects, larvae and their eggs that may to be present.”

Consumers should be aware that there are four main contributors to food spoilage: water, heat, light, and oxygen. Freeze drying removes 98% of the water in food, while dehydrating removes between 80% and 97%. Storing food in a cool, dark place helps to avoid heat and light exposure. However, the fourth factor, oxygen, can only be averted through quality processing and packaging, which is where the study found competitor’s products falling short.

“Our curiosity was piqued when we saw brands such as Wise Company implying that their pouches have up to a 25-year shelf life, which is rarely found in pouches of freeze-dried foods,” commented Norm Jager, head of research and development for Mountain House. “Freeze-dried meals serve families in times of dire need when emergencies hit, which means that it’s imperative that these foods deliver on the promises made. So instead of just sitting on the sidelines, we decided to test their products in an effort to educate consumers across the U.S. on the importance of oxygen, which should ideally be less than 2 percent for long term food storage.”

In distinction, Mountain House has a long-standing history of excellence in the freeze-dried foods industry, pioneering the necessary technology and processes for more than 40 years. As part of a rigorous, ongoing quality assurance program, Mountain House regularly tests its own archived products from as far back as 35 years.

One of my affiliates, Freeze Dry Guy, has carried Mountain House products for many years. Ready Made Resources, an advertiser, is also a Mountain House distributor.