75shares
Some of the links in this post may contain affiliate links for your convenience. As an Amazon associate I earn from qualifying purchases.

by Leon Pantenburg, Survival Commom Sense and Peter Kummerfeldt, Outdoor Safe “The water stunk like sewage, but it was all we had to drink,” the Vietnam vet mentioned during the interview. “The farmers fertilized the rice paddies with human excrement. We dipped the muddy, stinking water out of the field with a canteen cup then filtered it through a towel or handkerchief, then loaded it up with water purification tablets. It smelled terrible. It stunk. Even when it was 100 degrees and you were very thirsty, you could hardly force yourself to drink it.”

The British custom of tea time is probably one of the first water purification rituals. Long before germs and viruses were discovered, the act of boiling water to seep the daily morning and afternoon tea meant the Brits were purifying their water before drinking it. There’s no telling how many lives were saved because of this tradition.

During the Civil War, coffee served the same function. It was considered a healthy drink – the guys who drank nothing but hot, boiled coffee generally had a good chance of avoiding water borne illnesses. But the soldiers who drank clear, cold water out of a bubbling creek (downstream from a privy, small town or feedlot) frequently got sick. Small wonder that hardtack and coffee were considered necessities for hard campaigning!

Today, there is more polluted than pure water in the world. No matter where you go, you must stay hydrated to stay healthy and able to function. Here’s some advice on how to purify the water you find in the outdoors. – Leon

As an outdoorsman, talking to other outdoor men and women, I often hear two statements made regarding drinking water from outdoor sources. Some claim “I never treat the water I drink in the outdoors” while others say “I never drink the water because it’s got bugs in it.” 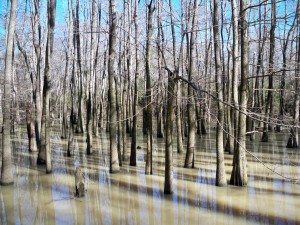 If this was the only source of water available, would you know how to purify it?

While the risk of water borne disease is much lower in North America than internationally, particularly in developing countries, it does exist. Wherever possible, water should always be treated to remove or kill harmful pathogens.

To be safe, water must be disinfected, which is defined as “the removal or destruction of harmful microorganisms.” To do this, water must be boiled, treated with chemicals or filtered. “Disinfection” of water should not be confused with “purification” of water.

Some of the methods used to purify water may not remove or kill enough of the pathogens to ensure a person’s safety so, to be certain that the water you drink is free from illness causing agents, it must be disinfected.

The first step in disinfecting water is to select the cleanest, clearest source of water available to you. Inorganic and organic material such as clay, silt, plankton, plant debris and other microscopic organisms reduce the effectiveness of using either chemical or filtration disinfection.

Chemicals used to disinfect water will clump to any particulate in the water reducing its ability to disinfect the water. Water containing a lot of material in it will also quickly clog a filter. For the best results, collect water from below the surface but not off the bottom. When using murky water allow it to settle and then filter it through your shirt-tail, bandanna or other piece of cloth.

Better still; take a few coffee filters along as strainers. These steps will greatly decrease the frequency of having to clean your filter, thereby increasing its life span.

Bringing water to a boil kills any organisms in it. Contrary to some sources, water does not have to be boiled for “ten minutes, plus a minute for every thousand feet above sea level” or for any of the other recommendations you may have read about!

The time it takes to bring water to a boil and the temperature of the water when it boils is sufficient to kill Giardia, Cryptosporidium and any other water-borne pathogens. Recognizing that the boiling point of water decreases as you climb higher, the temperature at which the water boils is still hot enough to kill those organisms that might make you sick.

Continuing to boil the water wastes fuel, evaporates the water and delays consumption. Overseas, especially in developing countries where river systems are still a frequent method of sewage disposal, boiling for a longer period of time (one or two minutes) is advisable.

Keep in mind that being able to boil water to disinfect it is dependent on having fuel available to burn; a metal container to heat the water in and the time it takes to boil the water.

Chemicals with the ability to disinfect water are known as halogens and include iodine and chlorine. The effectiveness of halogens is directly related to its concentration, the amount of time the halogen is left in contact with the water and the temperature of the water – the colder the water, the longer the contact time!

These water disinfecting chemicals are commonly available from most sporting goods stores especially those retail outlets that cater to the backpacking community and emergency preparedness.

Iodine in tablet form and liquid is available. Choose the tablets. Liquid iodine is messy, the containers are prone to leak, and you are never quite sure whether or not you have used too much or too little liquid.

Potable Aqua tablets, (www.potableaqua.com) are still used by the US Military, many disaster relief agencies, and those who either work or recreate in the field, as one of their primary ways of making water safe to drink.

Iodine kills harmful bacteria, viruses and most protozoan cysts often found in untreated water. Iodine is NOT an effective halogen when Cryptosporidium is present in the water. Fifty gray tablets are contained in a small, dark bottle. The recommend dosage of two tablets per quart or liter of water is sufficient to kill organisms such as Giardia. Two tablets should definitely be used if the quality of water is suspect (i.e. you are using water from river sources along which people live.)

Once the tablets are placed in the water it should be allowed to sit for at least thirty minutes, longer if the water is very cold, and then shaken to ensure that the iodine and the water is thoroughly mixed. The dissolved tablets do leave a slight iodine taste in the water, which some find disagreeable, in which case ascorbic acid (lemon juice or lemonade powder) can be added to neutralize the iodine flavor.

Iodine tablets are commonly packaged with a second, similar-sized bottle of ascorbic acid (PA Plus) tablets that deactivate the iodine making the water pleasant to drink. One tablet is usually enough to reduce the iodine taste to tolerable levels. Do not add PA Plus or other sources of ascorbic acid to your water until after thirty minutes contact time has elapsed.

Iodine tablets deteriorate on exposure to heat, humidity, moisture, reducing the effectiveness of the tablets. Over time, opening and closing the cap to remove tablets results in the normally gray colored tablets changing to a green or yellow color – they should not be used!

Military iodine tablets, sometimes found in military surplus stores, should also not be used – the military got rid of them because their shelf life (four years) had expired! Always carry the tablets in the original container. Decanting a few into other inappropriate containers results in a rapid deterioration of the tablets upon exposure to light and humidity.

Advantages of water purification tablets:
– Easy to use
– Lightweight
– Inexpensive
– Tablet form rather than liquid form.

Disadvantages:
– Potable Aqua is not effective against Cryptosporidium cysts.
– Some people are allergic to iodine
– People with known thyroid problems should not use iodine to purify their water
– Pregnant women should check with their doctor before using iodine to purify their water
– Potable Aqua or other sources of iodine should not be used as a long term (more than six weeks) method of purifying water

One significant disadvantage of using chlorine tablets is that you have to wait for four hours after adding a chlorine tablet before you can drink the water! Potable Aqua Chlorine Dioxide water purification tablets are one example of tablets that liberate chlorine when dissolved in water. I do not recommend carrying a container of household bleach in your survival kit to disinfect your water. There are too many variables; the concentration, the number of drops to add to the water, time, temperature etc. Consequently the water you are treating may or may not be disinfected. If you choose to use chlorine as your method of treating your water you should carry tablets.

Advantages of chlorine tablets:
– No after taste
– Unlike iodine, chlorine kills Cryptosporidium

A lot of confusion exists regarding the usefulness of filters to effectively disinfect water. Some filters remove only the “big stuff” such as Giardia and Cryptosporidium while others also remove viruses.

Some devices are pumps; some are bottles that require you to suck the water through a filter matrix, while others rely on gravity. Prices vary tremendously depending on the type of device you buy.

Generally filters that remove Giardia and Cryptosporidium are sufficient for 90 percent of your needs in North America.

Where viruses, such as Infectious Hepatitis, Poliomyelitis or others are a known or suspected medical threat to your safety, a filter with a finer pore size or a pump that incorporates an iodine resin to chemically kill the viruses, must be used.

There are many bottle filters on the market and as is often the case – you get what you pay for. Inexpensive filters commonly sold at sports shows and Saturday morning flea markets will not stand up to the rigors of back country activities. Purchasing a filter from a specialty backpacking or emergency preparedness store will cost you a bit more but the filters are reliable, tough and then, when you need to replace the filter cartridge, they are available.

I particularly like the Sawyer products (www.sawyerproducts.com) when I need a bottle filter or purifier. Sawyer also markets an in-line filter for use with hydration packs and camp gravity-feed water systems.

Where larger quantities of water are needed, and I don’t have time to use a gravity-feed system, or where lots of water is required for cooking purposes, a pump is a better option. While there are many to choose from I use a Pre-Mac “Trekker” pump sold exclusively by Emergency Response International (www.eri-online.com.) These devices are small, light-weight, straightforward to use and have easily replaceable components. (Editor’s note: The author does not represent any of the companies identified in this article.)