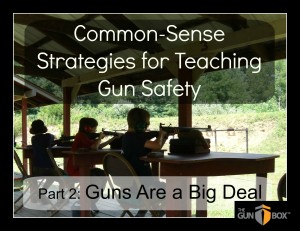 As a new mom, I was wary of having guns in the household. My husband was a lifetime member of the NRA and quite the gun enthusiast but I had never even fired a single shot. Never even used a BB gun.

My kids, on the other hand, know all about guns and gun safety. They’ve attended rifle summer camp, an Appleseed Project weekend, and dozens of trips to both indoor and outdoor shooting ranges. I mentioned in Tip #1, they’ve learned that a firearm is nothing more than a tool. they’ve also learned something just as vital:

A gun is a huge deal

A gun can take a life.  That’s a huge deal. The biggest, really, and it makes owning a firearm a serious responsibility.  Our kids have been taught to never put their finger on the trigger until they are ready to shoot. They know to always keep the barrel of the gun pointed in a safe direction, which is never at another person, and guns remain unloaded until we are actually at the range.

An important part of their firearms education has been that safety always comes first. When we talk with them about guns, we always use a serious tone and convey a no-nonsense attitude. Guns are never playthings. They aren’t for showing off.

A gun can take a life.

A challenge parents face in this process is helping kids understand the difference between the glorified gunfights they see on TV and in the movies and what a real gun can do to a person.  When a person is shot, there is no, “Take two!”  The injured person doesn’t pop up so they can appear in the next scene.  Gunshot injuries are real, painful, and can cause massive injuries and death.

But guns, in all their glory, are a foundational piece of thousands of movies and TV shows. Ironically, many of the actors and actresses who make anti-gun statements and commercials owe their fame and fortune to the very thing they claim to detest!

How well do you know your kid?

Above all, though, is knowing your own kid. Some kids are more likely to obey safety rules than others. Some just can’t resist trying to outrun a train or take the cinnamon challenge or see how many shots they can drink without passing out.

In one household, a loaded gun left in a dresser drawer will remain untouched and most likely forgotten, while in another, a child can’t resist touching it and playing with it.

Regardless of which side of the fence your child falls, compliant and accepting of boundaries versus contrary and always pushing the limits, you know him or her best. Their age and level of maturity are additional factors to consider.

Err on the side of gun safety

We have never worried about our kids and having guns in our home. They’ve learned how to safely handle them, there’s no glamor attached to them, and, frankly, my 15-year-old daughter finds them boring.

Even so, we have taken steps on the side of caution where our guns are concerned because it makes sense. More on that topic coming with Tip #3, using layers of safety.