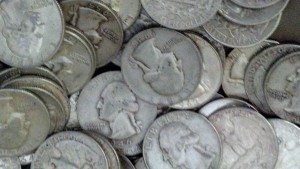 A few weeks ago I read a comment that asked, “What if you came across a bucket of old silver quarters that your grandma or grandpa had collected?  What would that mean to you and your family right now?” (paraphrased)

Well, that would mean my family had several pounds of silver!  Silver we could either sell or, at some point in the future, use as currency.  In other words, grandma or grandpa would have blessed us with a real form of wealth.

I’ve decided to be that grandma.  Granted, my kids are only 10 and 12, but someday, a bucket of real silver coins could make all the difference in the world to their lifestyle and future plans.  It’s so easy to start collecting these 90% silver coins.

Remind yourself that you are not buying quarters with a value of 25 cents!  You are buying silver.  The first time I bought pre-1965 quarters, I couldn’t believe I was giving the clerk $20 for a handful of quarters.

In a post-SHTF world, there’s no telling how much value a handful of pre-1965 silver coins will have, but I would love to be the grandma who blesses her children’s children with something that has real wealth.