By John A. Heatherly, Author of The Survival Template and The Cave and The Sea 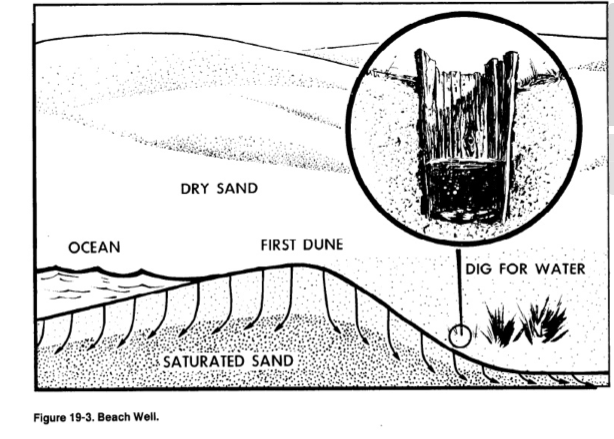 The following two-part article considers the use of a “Beach Well” to procure water.  First is an excerpt from THE CAVE AND THE SEA, A NOVEL, by John A. Heatherly, followed by the most outstanding resource information we could find.  Enjoy the story and please do not miss the reference material at the end!

A flat layer of fluffy clouds floated just above the southern horizon, contrasting blue sky and stone mountains with the darker shades of the sea.  Hawk looked stoic and calculating, while Kele and Coe were awestruck.

“This is indescribable,” she said softly, slowly scanning the horizon from east to west.

“Look, away from the river,” Coe agreed, “the desert and the sea meet … it is like a vast pool in the sand.”

Hawk finally spoke.  “In many ways it may as well be one big desert.”  He pointed to the water.  “That saltwater is not drinkable though the weather is still warm down here.  It brings back bad memories … though I did learn to survive it.”

Kele put her arm around him.  “We are with you this time, Hawk, and we have a home to return to.  Things will be better.”

They found the walking near the coastline to be easy, much easier, in fact, than any other part of the journey.

“The sea provides food, does it not, Hawk?” Kele asked.

“Yes, I suppose it does, though I rarely took advantage of it on my trip to the north.”

“I have some ideas when we stop,” she said, cheerfully looking over her left shoulder to the water.

“There is one trick I learned, though. Watch this.”  Hawk led them behind a wall of dune and rock, surveying the ground beneath his feet as he went.  He smiled when he discovered a low point in the sand, and dropped to vigorously dig into the depression with his hands.

In only a few minutes he had created a large hole; soon after the sand he was removing began to look dark and moist.  He sat back to rest, then leaned against a tall rock while keeping his eyes on the hole he had dug.

“Water is seeping into it!” Coe exclaimed.  “Is it fresh?”

“Yes, it is drinkable right out of the hole.  It takes time though, because the sand needs to settle to the bottom.”

Kele looked into the water hole.  “How did you learn of this, Hawk?”

He stared into the water as he answered.  These were truly bad memories for him.  “After I escaped, I moved through the dunes in an attempt to hide.  One morning I just happened upon a hole like this, though it had been improved with wood and the top was covered.  I was thirsty … I drank my fill then kept going.”

“I suppose the dunes and the sandy ground make the sea water drinkable,” Coe said.

“Yes – once I dug a hole in the sand on the other side of the dunes and the water was terrible.  What a waste of time!”

Kele laughed at him.  “Hawk, you are funny even when you are trying to be serious!”

Their friendly jokes broke his momentary funk.  The rest of the day was spent hiding from the sun and replenishing their canteens from the unexpected water source.

Please see AFR 64-4, Page 279 http://www.scribd.com/doc/4442666/AF-Manual-644-Survival-USAF-July-1985 for more outstanding information on the use of Beach Wells like the one described above, as well as many other sources of fresh water.