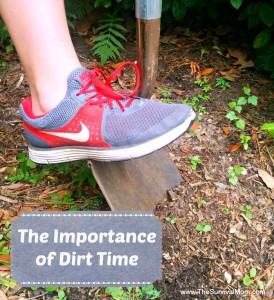 No matter what your prepping skill level is at the moment, whether you live in the urban jungle or out in the sticks, dirt time is critical.

What is dirt time?

Simply put, it is time you spend outside, away from the computer and television, learning and practicing skills rather than just reading about them.  Dirt time is crucial to your development as a prepper.  No, you might never find yourself in a position where you’ll need to survive the night in a debris hut, hoping against hope the noise you just heard is merely the wind and not a mutant eighteen foot rabid bear looking for a snack.  But, by taking the time to learn and practice these skills, you’ll earn a higher level of self-confidence.

How Does it Help?

I’ve seen it happen.  Someone who has never built a fire before struggles with that ferro rod, trying to get the sparks to hit just right.  They get frustrated and sometimes want to give up.  But, they keep at it, striking again and again and, suddenly, a wisp of smoke appears.  Quickly, they lean down and gently blow that glowing ember into flame. Slowly feeding, nursing it, they soon have an honest-to-goodness fire going. By now, they’re grinning ear to ear.

It is something of a rush, actually, the first time or two you build a fire on your own.  The confidence that comes from doing it is very empowering.

I’m all for researching and reading about new skills and such, but, all that knowledge won’t do you much good if you’ve not done it yourself and practiced those skills.  You can read all you want about how to navigate using the sun, the moon, and the stars.  It isn’t until you get outside and see how it all looks in the real world that you’ll actually start to know what you’re doing.

Think about it like this–how many times have you bought a ready-to-assemble piece of furniture, compared the instructions to what was in front of you and thought, “Um, this looks nothing like the picture.”  We’re all human and we all make mistakes.

Let those mistakes happen now, when they won’t cost you dearly.

Do not assume you will somehow be able to put all your reading and head knowledge into practice when you’re in a scary situation. If there isn’t a degree of muscle memory and previous practice in place, you’ll be zombie bait as you fumble to build that water filtering device, set a trap to catch wild game, or build a lean-to of pine branches.

Dirt time is also important from a health standpoint.  It gets you outside, soaking up sunshine and breathing clean air.  It just isn’t healthy to spend almost every waking moment indoors with artificial light and filtered air.  Finally, dirt time is just plain fun.  At least, it should be.  You shouldn’t look at time spent outdoors as a chore.  Instead, it should be like a vacation from household chores and the boring day job.  It is rather difficult to be in a bad mood if you have some sunshine on your face, a nice breeze blowing, and some dirt between your fingers.