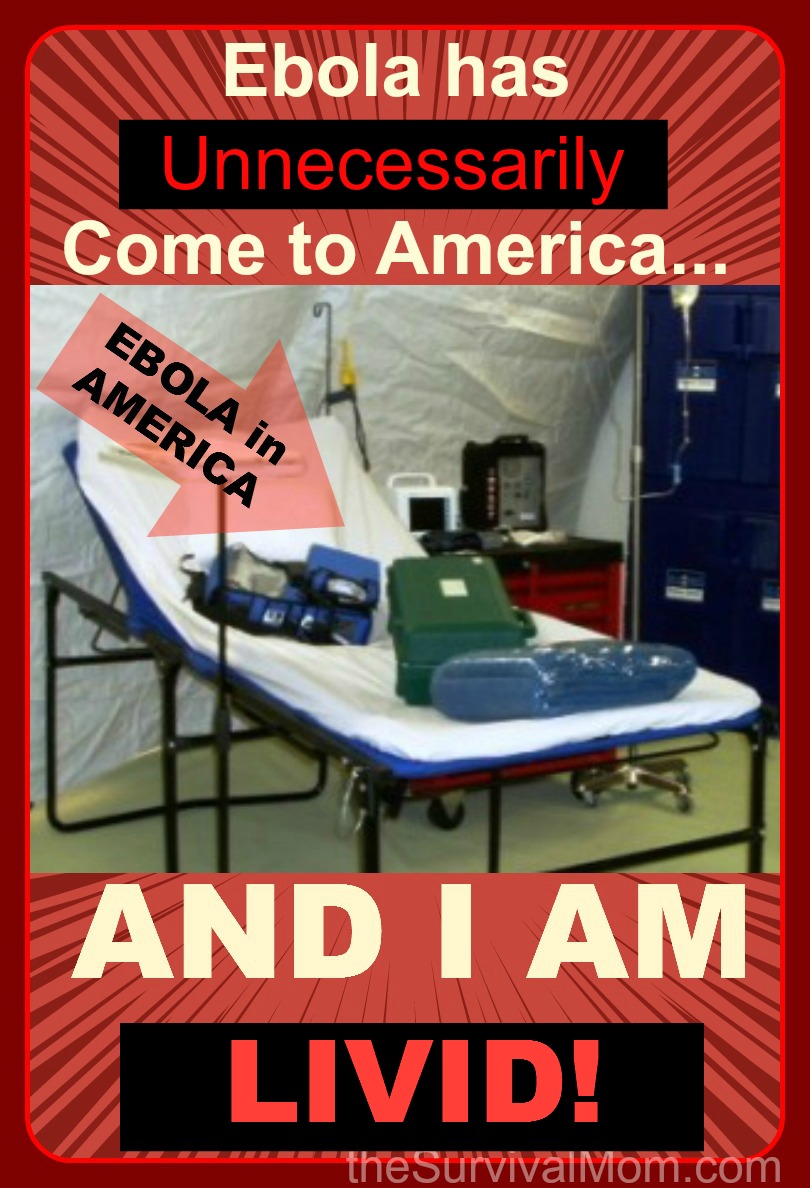 I am horrified at what has been unfolding in the U.S. in regards to the Ebola virus. From 2003-2005, I was the Team Leader of a U.S. Government Disaster Medical Assistance Team, a 120+ member group of volunteer physicians, nurses, medics, and supporting personnel able to respond to disaster sites at a moment’s notice to save lives.

My team worked their butts off to train, prepare, exercise, and deploy to disasters. We made a difference in Americans lives, and even though I’ve left the team, it continues to fulfill its’ mission: “Catastrophic Care for the Nation.” My team is part of the 70+-team National Disaster Medical System, a public-private partnership that silently prepares 24/7 to come to the aid of stricken communities in the midst of disaster and chaos.

But as hard as the teams may work to save lives and alleviate suffering, when people who are supposed to be on our side can’t seem to get anything right, it makes us understandably upset, even angry.

Our Health System is the Envy of the World

I have incredulously watched the slow-motion train wreck that is the reaction of the Centers for Disease Control (CDC) to the Ebola crisis, and all I can do is cringe. As a country, we are incredibly fortunate to have the best health care system in the world. Leaders of other countries routinely fly here for care because there is no finer care available. Cedars-Sinai, the Mayo Clinic, Johns Hopkins, Massachusetts General, all of these hospital names are familiar and bring to mind quality and excellence.

So Much Potential, Such Little Results

Sadly, our Federal public health infrastructure hasn’t kept up with the excellence found in local primary care and hospital systems. In particular, the CDC has played fast and loose with the containment of incredibly dangerous infectious pathogens, most recently in 2012 and earlier this year.

Even more disturbing has been the attitude of CDC Director Dr. Thomas Frieden, who testified before Congress on October 16, and said, “We remain confident that Ebola is not a significant public health threat to the United States,”

Quickly following that statement he then said in written testimony submitted before he appeared before a panel of the House Energy and Commerce Committee. “We know Ebola can be stopped with rapid diagnosis, appropriate triage and meticulous infection-control practices in American hospitals.”

Does this guy sound like he’s taking things seriously?

This is part of the reason I’m livid.

All the while, Frieden and President Obama are in deep denial over the utility of travel bans or restrictions of persons traveling from the three most affected countries, Sierra Leone, Guinea, and Liberia. Such restrictions are favored by many in the health field, notably by Dr. David Samadi, M.D. and others.

The Associated Press noted that, “border closings may also be helping halt the spread of Ebola” in a region where 4,500 people have died of Ebola and over 200 medical professionals have passed away as well. According to an NPR report, Ebola is referred to as the “nurse killer” in Liberia because it has killed so many caretakers.

Ebola, as the Associated Press noted, has ravaged, “Liberia, Guinea and Sierra Leone, overwhelming their health systems,” and countries like Ivory Coast, Guinea-Bissau, and Senegal that share a border with one of these affected countries “have closed those borders.”

International SOS, which has been actively monitoring Ebola in Africa for its member organizations, compiled a list of nations that have instituted, “entry restrictions” for land, air, and water travel. In addition, “health screening has also been implemented at ports of entry and departure in various countries throughout West Africa.”

At a House hearing on Thursday in which Centers for Disease Control director Tom Frieden refused to answer whether his agency has discussed travel restrictions with the White House, Rep. Morgan Griffith (R-VA) referenced the International SOS list. Frieden said he had not seen it yet but would take Griffith’s word that numerous African nations have been successfully combating Ebola with border restrictions. Frieden, in a statement, admitted that “porous land borders” initially worsened the Ebola outbreak in West Africa.”

Unfortunately, the travel restriction issue has been conflated with our ongoing “open borders” immigration issue, so our Ebola medical strategy is now politicized.

Are you beginning to get angry?

We now know that the CDC was slow to provide support to the Texas Health Presbyterian Hospital in Dallas, where Liberian national Thomas Eric Duncan was admitted as America’s first confirmed Ebola case. Duncan died on October 8, and left a legacy of infecting at least two of his nurses. The two nurses who contracted Ebola, “demonstrate the need to strengthen the procedures for infection-control protocols which allowed for exposure to the virus,”Frieden admitted.

The nurses who treated Duncan made a statement through their union that is worth reading.

It’s enough to piss anyone off!

Ebola Travels from Texas to Ohio, and Takes a Cruise

The CDC’s passivity next led to one of the infected nurses, Amber Vinson, to take a flight to Cleveland, Ohio, while under “voluntary self-monitoring” for Ebola symptoms. Even when she began to feel symptoms in Ohio and she inquired of the CDC whether she should take her flight home, she was cleared by the CDC official to fly.

A review of the circumstances has led the airline, Frontier Airways to decontaminate two of their aircraft and notify about 800 travelers of their potential exposure due to Vinson’s travel. Even more ridiculous, the public learned that a Laboratory Supervisor who had handled Duncan’s blood samples was on a Carnival Cruise Lines ship, and subsequently the countries of Belize and Mexico refused to allow the ship to dock due to the health risk.

Thousands of pissed off travelers and the Ebola story here in America continues to unfold with a new case in New York City. How many more will we learn about in the days and weeks to come?

This didn’t have to happen!

“The doctors and health workers of Médecins sans Frontières, or Doctors Without Borders, have done so, in heroic, lonesome fashion. The group has been fighting Ebola in the villages of West Africa, where the entire social structure has broken down, since well before the West cared, and with desperately few resources.”

Pierre Trbovic, an M.S.F. volunteer from Belgium, wrote a few weeks ago about taking on what was regarded as the most awful job at an Ebola center in Liberia: telling people that there were no more beds. “The first person I had to turn away was a father who had brought his sick daughter in the trunk of his car. He was an educated man, and he pleaded with me to take his teenage daughter, saying that while he knew we couldn’t save her life, at least we could save the rest of his family from her. At that point I had to go behind one of the tents to cry,” he said. The center couldn’t admit more without putting all the patients at risk; there was a constant struggle to keep the tents clean of human excrement, blood, and vomit, and to remove the dead bodies.”

In August, M.S.F. had six hundred and fifty people in the field. Now, it has three thousand, in six locations in Liberia, Sierra Leone, and Guinea. “Now we have reached our ceiling,” Brice de le Vingne, the director of operations, said on Tuesday, according to Reuters. The same day, the group noted that sixteen of its workers had tested positive for the Ebola virus, and nine had died.

That here, with our bright hospitals, we would allow the disease to spread through simple carelessness feels like a betrayal. At last count there are only 9 hospital beds in the entire U.S. prepared for Ebola patients!

Ebola Czar? He Wouldn’t Know a Virus if He Tripped Over One

I conclude with the latest madness to befall us, the appointment of Ron Klain: “Facing renewed criticism of his handling of the Ebola risk, Obama will make Ron Klain, a former chief of staff to Vice President Joe Biden, his point man on fighting Ebola at home and in West Africa. Klain will report to national security adviser Susan Rice and to homeland security adviser Lisa Monaco, the White House said. Klain does not have a medical or a health care background.”

Now I’m REALLY pissed! It’s time to hold our elected officials accountable and to let our voices be heard. Ebola has come to America unnecessarily and left us with a scarier and more uncertain future than ever.

12 thoughts on “Ebola Has Unnecessarily Come to America…And I Am Livid!”