0shares
Some of the links in this post may contain affiliate links for your convenience. As an Amazon associate I earn from qualifying purchases.
Article reprinted with permission from author Marjory Wildcraft of Backyard Food Production.
Well guns aren’t really that useful for digging or anything like that.  But do you need a gun if you are becoming self-reliant?  Let me tell you a true story that happened to me which had me re-think the whole concept of security.
Back when we were first starting to sell the DVD Food Production Systems for a Backyard or Small Farm I had a very shocking experience.  When I say shocking, I mean I was really dumbfounded, and almost couldn’t speak for a long time. 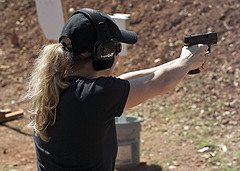 I was at a local shop talking with the owner about carrying the DVD in his store.  He was congenial enough, but looked me right in the eye and told me “I will never need to grow food”.  I told him that you never knew what was coming and being able to grow food could be a crucial skill.  He flatly told me he would never have to grow food.  I asked him why, and he said “because I have this”, and from under the counter he pulled out a big black semi-automatic gun.

I stared at the gun not understanding, and I asked him ‘What do you mean?”

“Well, if anything happens” he said, “it is like this; with this gun I can get all the food I need from people like you who grow it”.

Several customers who had been listening in on the conversation agreed with the shop owner.  They were ordinary looking people and I would have never guessed they would have this kind of thinking.

Now I live in Texas, which has a proud tradition of gun ownership.  Buying, selling, and swapping guns is easy and legal – in fact, it is a major pastime for many Texans.  And while Texas may be on the more extreme end of the spectrum, that kind of mentality exists in some form everywhere.

So I began a project of researching guns and self-defense.  Within the history of recent periods it is well documented that crime and violence go up as economic conditions go down.  And there certainly are scenarios where law and order break down.  Having some level of defense is an important skill. 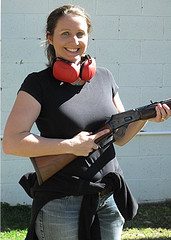 Here is a short summary of the major points and useful resources I have discovered about self-defense.  One of the first things I found is gun owners are strongly opinion-ed and they rarely agree.  Most of them were very friendly and offered lots of help in my process of trying to find what weapons I might need and how to use them.  But be aware there is a lot of conflicting information out there.

Getting some basic training is essential.  Of all the videos I’ve seen, I found the series produced by The Outdoor Channel titled “The Best Defense” to have the most useful and specific information for a novice gun owner.

Of the many trainings that are available there are some that are free or low cost.  We attended an excellent training done over a weekend where they teach rifle marksmanship and an entertaining dose of revolutionary war history.  The training is sponsored by a group called Appleseed.  As of 2010, the course was free to women and children, and only $75 for men.  They welcomed beginners and a majority of the rifles were inexpensive .22 caliber.  To find an Appleseed event near you click here. (Lisa’s note: The fee for the Appleseed event we attended was much less expensive.)

As a woman, I found that I felt comfortable with the .22LR caliber as a first handgun and rifle.  Lower startup cost, relative quiet, and low recoil helped my skittish nerves and fear of these powerful new tools.  As I gained more experience and got comfortable with gun safety and operation, I moved up to a 9mm handgun.  Over half of all hand guns sold in the US are 9mm and with that much popularity the caliber is likely to be available as long as ammunition is available. 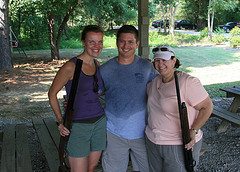 Another very common and versatile gun is the shotgun.  By far, 12 guage is the most widely available size.  If you are only going to have one gun, I have to agree with the experts recommendation of the 12 gauge shotgun with a shorter barrel as an all around weapon.  The first time I shot a 12 guage it was loaded with heavy buckshot and I almost fell over from the noise and recoil and I was afraid of them for a long time.  Later, a friend introduced me to low recoil rounds, and after some testing, I realized that even simple bird shot loads (which are fairly light) would be highly effective in home – or garden – defense scenarios.  My 11 year old son can also handle the 12 gauge with lighter loads.

Hopefully, you and I (or my son!) will never get to the point of needing a weapon to defend our gardens and livestock.  But it sure is something to think about – and prepare for.  Actually, I have been finding it a lot of fun to go shooting.
Visit Marjory’s website and sign up for her newsletter at Backyard Food Production.