Earlier this year on a cool Arkansas morning, I was driving north toward the airport in Branson, Missouri. At 6:00 on a Sunday there were few cars on the road and I was enjoying the scenery. 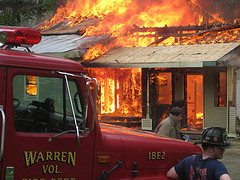 Quickly, I pulled over to the side of the road and dialed 911. The call was answered on the second ring and I described what I saw.

“There is a house fire on the west side of Highway 62. It’s a dark gray, two-story home, and I see bright orange flames in the attic and smoke coming from the roof.”

I described my location and gave the nearest exit number, but after conferring with others in her office, the 911 operator informed me that she would have to transfer me to the Bentonville 911 operator.

The call was transferred and I once again told my story in detail. I said, “I am sitting here on the side of the road watching flames shoot out of the attic of a home.”

Incredibly, I didn’t see a single person outside the  home or along the street. It was 6:20 or so by this time, and whoever was in that house was still sleeping.

Several minutes went by as the 911 operator questioned me again and again, and she finally said, “You’re in Rogers. We’re going to transfer you to them.”

Really?? Three 911 operators and there was still not a single fire truck on its way!

I told my story to the third operator. I described my location, the highway number, the exit number, and was told, “We don’t see any fire. Tell me again where you are.”

By this time, orange flames had punched numerous holes through the roof of that house, and it’s doubtful it could have been saved. Amazingly, not a single neighbor had come outside after smelling the smoke although the house was on a residential street facing the highway.

Around 6:30, I got back on the road, thoroughly frustrated.

Here’s the clincher: just a few hundred yards north of where I had parked and observed the burning house, I noticed a large tan building on the left side of the road with a sign that read, “City of Rogers Fire Station.” If the firefighters inside that building had been alerted and had just stepped outside, they would have seen the same black smoke that I witnessed. 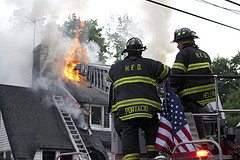 I have no idea what happened to that house or whether or not anyone was inside.

This incident made me wonder how prepared my own family is for the type of emergency that usually brings first responders within a matter of minutes. Too often we get caught up in the worst of worst case scenarios and don’t make plans for something as, “ordinary”, as a house fire. Here’s a checklist to help you get ready for this, “everyday emergency.”

I was worried about the family living in that burning house and several days later I contacted the Rogers Fire Department. I was told that I had to file a Freedom of Information Act request before I could be told whether or not there had been a house fire that day!

One reason these plans and precautions are important is because towns and cities of every size are experiencing major budget crunches. Some have made the decision to charge homeowners for the services of a fire department! Budget woes are only going to get worse and first responders may not be as readily available as they are now.

In addition to other survival scenarios that you’ve planned for, be sure to include the ordinary, but deadly and devastating, house fire.