105shares
Some of the links in this post may contain affiliate links for your convenience. As an Amazon associate I earn from qualifying purchases. 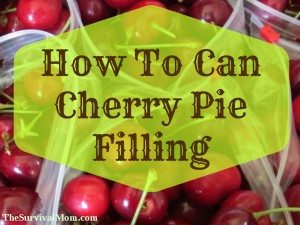 Can I just say how much I love cherries? They are one of my most favorite fruits. Sweet, juicy, and slightly messy. It seems like nothing is quite so good unless it stains like the Dickens. Late June and early July is cherry season in my neighborhood, but unfortunately it doesn’t last forever. We usually get a huge bumper crop and have to rush to eat, bake, or preserve our cherries before they all go bad.

I am not much of a fan of just plain canned cherries, so this year I decided to branch out and try a few different things. I feel that pie filling is always a good choice. Everybody likes pie, right? If you’ve only ever canned fruit in sugar syrup, don’t worry – pie filling is not much more complicated. It’s basically the same, except instead of sugar syrup, you add a thick sauce to the fruit. That sauce generally combines sugar, water, spices and/ or flavorings, and a thickener.

The basics of cherry pie filling

Most of the cherries found in stores are bing cherries – sweet, red, and juicy, perfect for eating fresh. These aren’t the kind that are used for making commercial cherry pie filling. Eaten plain, pie cherries are excruciatingly sour.

Funny story: my grandmother used to have a pie cherry tree in her backyard. I got a very horrible surprise when I tried to snitch a couple while she was making a pie. Those cherries were worse than lemons. Now, pie cherries are a good variety when it comes to making pies and pastries, however, because the tartness counterbalances the many cups of added sugar. As such, when making pies with bing cherries you need to add a lot of lemon juice – like 1/2 cup for seven quarts.

Before canning must come the preparation. For cherries, this means pitting. If you are canning them plain, you can get away with merely 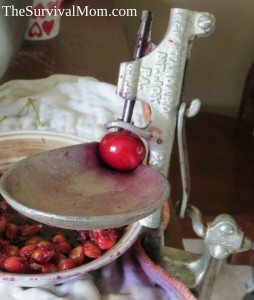 giving them a slight poke with a pin – you can spit out the pits as you eat them later. But for anything else, you really need to remove the pits first. Cherry pits are not commonly thought to be a welcome addition to pie. I happened to have inherited this lovely cast-iron number from my grandmother, who I believe purchased it in the 1950s. If you aren’t fortunate enough to have a grandma as awesome as mine, there are many to choose from on Amazon, made of easy-to-clean plastic.

I used a recipe that came with some Thick Gel modified starch, that is especially for making pie filling. Instead of becoming runny after baking, it will remain thick. It comes in powdered form. Most pie recipes call for some kind of thickener, whether it’s flour, corn starch or something else. If you don’t have Thick Gel immediately on hand, you can substitute regular corn starch. I prefer not to use flour because I feel it gives the pie a pasty, floury flavor.

This recipe makes seven quarts of cherry pie filling, so I hope you really like cherry pie or know someone who does.

Combine all ingredients in a large pot except cherries, lemon juice, and almond extract. Stir over medium h 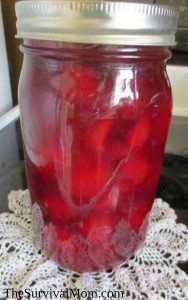 igh heat until mixture comes to a boil. Add lemon juice and boil for an additional minute.

If using Thick Gel or similar:  The mixture will be too thick to spread down into the bottom of the jars, filling up the spaces between the cherries. Instead, remove the mixture from heat, stir in almond extract, and fold in cherries. You may need a large cooking spoon instead of a ladle to fill your seven quart jars.

Be sure to wipe the rims of your jars very thoroughly before applying the lids – pie filling is messy, and residue on the rim will prevent the lid from creating a proper seal. Process your jars for 30-35 minutes (depending on your altitude) in a boiling-water canner.

Want to learn more about canning?