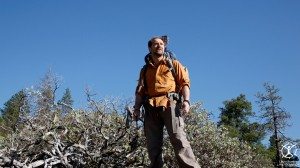 Any time “Man vs. Wild” is mentioned, some stalwart soul will say, “Les Stroud is a real survival man.  Bear Grylls is just a poser.”  Well, recently I read Mr. Stroud’s most recent book, Will to Live, and while it neither confirms or denies his superiority over any other survival expert, it’s entertaining with dozens of helpful survival tips.

The format of the book centers around real-life survival stories, most of them already well-known.  As Les recounts the stories, he interjects his opinions of the decisions and actions of those who lived through horrendous trials and tragedies.  He also inserts survival lessons and tips relevant to the narrative.  Some of the stories he tells are well-worn, such as that of Nando Parrado, one of the survivors of the airplane crash in the Andes Mountains in 1972, the Robertson family who survived 38 days at sea, and the Stolpas, a Utah couple and their infant baby who found themselves stranded in a blizzard in northern Nevada.  I was already familiar with most of the stories but enjoyed the re-tellings.

What was jarring were Les’s interruptions of the stories and, sometimes, his observations which sometimes seemed harsh and judgmental.  Even a survival expert such as Mr. Stroud cannot know every variable, dynamic and subtlety that would necessarily have been part of the decision-making process of both survivors and victims alike.  For example, when Antarctic explorer, Douglas Mawson, is stranded with little food and discovers that his friend, Dr. Xavier Mertz, has died during the night, Stroud criticizes Mawson for burying Mertz and conducting a simple funeral.

It was a noble act, but in my mind it was foolish and unnecessary…Now Mertz was gone, and Mawson’s only responsibility was to himself and those who cared for him back home, thousands of miles away.  His sense of duty might have been appeased by the labor, but his own survival would have been compromised.

Technically, this may be right, but only Mawson was there, and perhaps his efforts toward burying his friend was his way of holding on to his own sense of humanity.

Weaved within the survival stories are sidebar tips and lists that any survivalist can’t help but love: contents for a Car Survival Kit, a Day Pack, and even how to preserve a moose.  Les’s extensive experience in a wide variety of survival scenarios is obvious, and I picked up some great tips should I ever be stranded in the Amazon and need to use a can of insect repellant as a flamethrower.  I also liked that Les addresses the mental and even spiritual aspects of survival.  It’s not all about having a bitchin’ Bug Out Bag.

I recommend Will to Live and have placed it on my 30 Survival Books for your Collection.  Because of its combination of entertaining survival stories and helpful tips, I give it four out of five stars.

4 thoughts on “Book review: Will to Live by Les Stroud”