10shares
Some of the links in this post may contain affiliate links for your convenience. As an Amazon associate I earn from qualifying purchases. 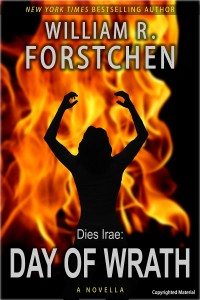 “I did not want to write this [book], but, as I expressed to friends, I feared that if I did not write it, and this nightmare happened, which it really can, I would be responsible in some way for remaining silent. If you read on from here, it will not be an enjoyable experience.”

~ William Forstchen in the “Day of Wrath” introduction.

I have written several book reviews. Part way through each book, I would already know what “angle” I would take in my review. By the time I finished reading, the words of the review came easily. I either liked the book or didn’t, had some words of wisdom to share about the contents, and a recommendation to buy it or skip it.

This book is very different.

The Day of Wrath was an excellent read.

It was not an enjoyable experience.

Day of Wrath is the story of a coordinated multiple target terrorist attack in the United States by ISIS. It’s told through the eyes of several different people, including victims and terrorists. The main character, a teacher at the middle school his daughter attends, seems to clearly express the author’s point of view on the current state of the world.

The story goes into fairly specific detail of how the jihadists come into the country, wait for their signal, and then attack in several locations at the same time. The terrorists expect a certain response, and Americans do not disappoint them, falling right into their plans.

The chapters that put us in the mind of the bad guys run consistent with my own study of Islam and are a good representation of a jihadist’s motivations, based on what their spiritual leaders and the Koran tell them.

Please remember: this is a review of a book  – a work of fiction, albeit one inspired by and incorporating real events – based on my personal experiences, and nothing more. It it not a historical or political analysis. It is simply a review of a novel by a popular dystopian author.

I read the entire 144 page novella in one sitting. It was an engaging read that kept me turning the pages. It also made me sick to my stomach. So I can’t say I “liked” the book, but I am glad I read it.

When speaking to a friend about this book she asked, “Why would the author give the bad guys this terrible plan for an attack?” That’s an extremely naive question. Terrorists don’t need our help to come up with ways to attack us. They have been working on it themselves for a long time.

It is believed that ISIS has already crossed, or has plans to cross, into the United States along our southern border. ISIS is in many ways a bigger threat to us than Al Qaeda because they are more barbaric, better funded, and have greater resources.

The book was just released in the middle of August. It includes factual events perpetrated by ISIS over the last several months, as well as references to previous real terrorist events, woven into the fictional storyline.

That is what makes reading this so disconcerting: The reader doesn’t have to suspend belief in order to believe the story being told.

The ending was not where I expected the story to go. It was still shocking because its believability might have made it the scariest part of the entire book. I will leave it at that so as not to have any spoilers, but be prepared not to be “satisfied” with how it all unfolds.

One thing I enjoyed about Mr. Forstchen’s previous novel, One Second After, is that it gave the reader excellent information, throughout the storyline, about how to prepare for an EMP and its aftermath. I didn’t find the same subtle instruction in this novel. With the exception of carrying a firearm at all times and homeschooling your children, I’m not sure there was much practical learning value to this story.

I recommend reading this book, but with a clear warning that some parts are difficult to read. This is not a “feel good” story where everything works out in the end and folks ride off into the sunset. People die, children are tortured and murdered, and schools are involved.

The whole story, but especially the ending, may make you mad. It will remind you that the issue with our porous borders isn’t just about Mexicans and Central Americans looking for a better life. It will also give you a clearer understanding of what an ISIS attack on the US might look like and reinforce the reality that ISIS is a threat to this country.

I hope that it makes you more focused on the threat of terrorism that our country still faces, even though we have gone 13 years without a large scale, coordinated attack. That focus should not manifest as fear, but rather as vigilance, both to what is happening around us and in our personal preparedness for potentially terrible times.

If you’ve already read the book, or decide to read it, please share your thoughts in the comments below.