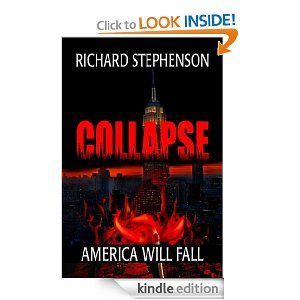 As you may have guessed, I have almost no time at all to just sit down and read a book. I have a huge stack of non-fiction, survival related books, and they’re sitting right where I put them.

I scarcely have time to take a shower and make myself presentable each day, much less wile away the hours with my nose in a book.

This is why it’s such a delight to happen upon a book, purely by chance, that grabs my attention from the first page and keeps me entertained through the last.

Collapse by Richard Stephenson is that type of book.

Incredibly, Richard never had big dreams of becoming a novelist and Collapse is his first book, based on his musings of what it would take for America to collapse. It isn’t a cheery book, but it’s gritty, realistic, and definitely held my attention.

For someone with ADD, that says a lot!

As the book opens, America has been hit with a second Great Depression that has devastated the economy, a killer hurricane that has reduced Florida to third world status, and a vicious, ongoing war with the Empire of Iran. America is crippled and the President faces enemies within his own administration.

Collapse introduces us to three main characters. First is Howard Beck: billionaire, genius, close friend to the current President, and affected by Asperger’s Syndrome. Richard was smart to introduce this character first because everything about Howard is, well, really eccentric, and I kept turning page after page, just to learn more about this guy!

Richard Dupree is a felon in a high-security prison, but we soon learn that he is a former Navy SEAL whose backstory makes him a sympathetic character. Maxwell Harris rounds out the group, and we learn that he is burned out, looking forward to retirement, and is faced with a Category 5 hurricane aimed directly at his small Texas town.

The main characters in Collapse are very well developed and intriguing, and their individual story lines are strong and skillfully woven together. I like complex plots and was a big fan of Tom Clancy, so this feature was a big plus for me. The author also includes a few unexpected twists and the book is fast-paced.

[tweetherder]There are a lot of survival and prepper related novels on the market, not all of them worth reading. Collapse is different.[/tweetherder] It reads more like a novel from a best-selling author than something pecked out on a keyboard over someone’s lunch hour!

For more details, check out my video review.