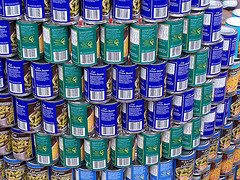 On my very first foray into food storage, I loaded two grocery carts with mostly canned food.  My pantry contains dozens of cans of chile, beans, tuna, soup, and a stray can or two of ravioli.  (My kids kicked the ravioli habit a couple of years ago.)  At the time I didn’t know anything about BPA in their interior lining.

Is BPA, bisphenol A, a concern of mine?  Yes, but mainly because I’m fed up with additives and the unnecessary overuse of chemicals in our daily lives.  Years ago I was shocked at how many food products contain high fructose corn syrup, and now it seems, most cans have BPA in their lining.  Some companies, including Campbell’s Soups and Kroger, have voluntarily removed BPA from their cans but recently the FDA decided that although they, “share the level of concern,” about BPA, they don’t believe there is enough evidence to ban it.  (Instead, they’ll double down on their efforts to arrest farmers selling raw milk.  But I digress.)

BPA is controversial, with even government agencies disagreeing on its level of toxicity and its possible effects on humans. In particular, infants and children seem more likely to be affected by this particular chemical.  It’s been linked in some studies to everything from cancer to infertility.

My point of view is, why?  If Kroger and Campbell’s can remove BPA from their cans, then why is it even there in any cans?  Isn’t it wise to err on the side of caution?  Certainly it makes sense that the fewer chemicals and additives that we inhale or consume is a healthier way to live, and isn’t promoting healthy lifestyles one of Big Brother’s most recent campaigns?

In spite of the health concerns swirling around the use of BPA in the linings of cans I believe commercially canned food can play a role in the food storage plans of many families.  Here are some tips for incorporating canned foods in a healthy, level-headed way.

This video explains a bit more about how canned goods can be part of a safe and healthy food storage plan.