Welcome to The Survival Mom!

The Survival Mom blog was launched on June 1, 2009, by super-newbie blogger, me, Lisa Bedford, and is now read by hundreds of thousands of visitors each month from around the world.  When I first started the blog, it was partially a way to work through my own angst with the world in general and the economy specifically. It was a hobby, but one that kept growing and growing.

When I started prepping back then, it seemed like a fad – a temporary reaction to a bad economy and troubled times. Either things would truly and catastrophically fall apart, or things would go back to normal, like they did with Y2K worries. Several years, 1600+ posts, and millions of page views later, that clearly isn’t the case. Unemployment and record numbers of Americans on food stamps continues and a chaotic world has become even more unbalanced and unstable.

Now I equip women with survival training to give them confidence and skills so they will have a secure and prepared home. A great way to dip your toes into the world of prepping is my DO IT NOW Challenge. You can learn all about it at this link and register to get started. 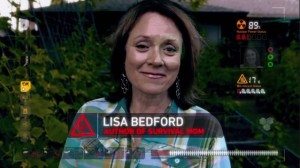 I’m the mother of two spectacular homeschooled children who are now 18 and 20 and wife to a kind and patient man.

I’ve always been a news junkie, but in early 2009, news headlines hit a little too close to home with stories of an American economy that was near to rock bottom, layoffs and bankruptcies everywhere, and with just a quick look around my neighborhood I saw how those stories were affecting everyday people like me. So many good, hardworking people lost their jobs, homes, and financial security, almost overnight.

I knew it could happen to us.

That’s when I began digging around the internet for information about how I, an average suburban mom, could protect my family and our lifestyle. It didn’t take long before I ended up in the realm of the doomers, survivalists with tips for food storage, purifying water, and dealing with snipers!

I sorted through mountains of information, found what applied to my family, and got busy “prepping”. I had no idea what preppers were. I only knew that I could be proactive and prepare for emergencies by doing what moms have always done — taking charge and getting things done!

In late 2009, I started The Survival Mom blog and, coincidentally, preppers hit the news in a big way. I was interviewed by a reporter from Newsweek magazine, just 4 months after my blog started. She had heard that prepping was a big trend. Many other interviews followed, but the problem for many of these reporters was that I was so…normal. Most of them were looking the dramatic, the weird, the fringe.

We didn’t have a bunker. We didn’t have drills to see how fast we could don gas masks and Tyvek suits, and we weren’t teaching our kids how to forage for edible insects. In fact, we were so much like every other family that one reporter said, “You seem so…happy and normal.”

Why, thanks! I like to think of myself as just a very smart and very aware mom who will do whatever it takes to safeguard her family. This article on Vice explains a bit more about my prepping perspective, and this one from BuzzFeed manages to show the world just how normal I am!

I usually write about:

Several years ago, I was approached by a New York literary agent, who asked me if I had ever thought of writing a book. I had, but was a little terrified at the prospect! He walked me through the process from drafting a proposal through finishing the manuscript (120,000 words!!) and then sold my book to Harper One. That was my first book, Survival Mom, a 300+ page family survival manual.

Now, a little braver and a lot more experienced, I’ve launched into self-publishing and have plans to publish a series called Survival Mom’s No Worries Guides. The first in that series is my newest title, Emergency Evacuations.

20 Random things about me