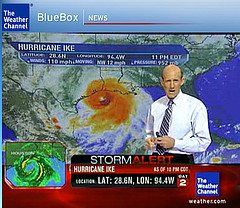 Last year, Kathlyn Smith of Texas shared with me some of her hurricane experiences.  She’s a single mom in her 50’s and has managed to ride out two recent hurricanes, Ike and Rita, on her own.  A portion of this interview is in my upcoming book, but I thought you might be interested in her entire story.  In the comment section, tell us the main thing you learned from this interview!

Survival Mom: How many evacuations have you experienced?

Survival Mom:  In regards to Hurricane Ike, when did you decide you would evacuate?

Kathlyn:   I work on Galveston Island but could not leave work until our office was secured for the hurricane, could not leave until Thursday evening before the storm hit on Friday night/Saturday morning.  I wanted to get on the road Thursday, but could not due to the huge traffic jams on the major thoroughfares.  Police prevented taking back roads to get out of town.  They wanted everyone on the freeways.

By Thursday night the news reporters and weather people had frightened the general public to the point that those who lived north of Houston at elevations of 250-300 ft. got on the roads ahead of the people who were forced to leave under mandatory evacuations so they were stuck in traffic for hours.  Lots of cars ran out of gas so stations were closed because the owners/operators had left to secure their own properties.  Cars out of gas were pushed off the road and the people in them were just left by others, including the elderly and infirmed. 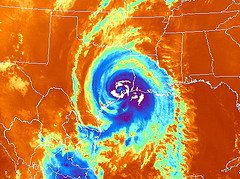 When I evacuated before Hurricane Rita, it took me the better part of a day to drive what should have taken about an hour.  Again, gas stations were quickly out of gas and people were fighting over gas at the pumps.

During Hurricane Alicia (1984), we got stuck on the road in our car with an 18 month-old as the storm passed over.  Again, we left in plenty of time but did not anticipate the problems with traffic.

Survival Mom:  Did you think about staying home and what changed your mind?

Kathlyn:  I ended up staying home for the duration of Hurricane Ike due to the massive traffic jams but left immediately after because of the lack of power and the potential that it would be out for as much as 21 days in 100 degree heat.  I had water from the storm in my home and did not feel that it was safe to stay.  I mopped up what I could and turned the A/C down so it would come on if power was restored.

Survival Mom:  What do you pack for evacuations?

Kathlyn:  If you live on the Gulf Coast for any period of time, you learn to keep prepared for the next storm.  The stores are stripped within a couple of hours and are filled with frantic people looking for something to drink and eat.  The cash registers and electronic pay systems are quickly overwhelmed and eventually shut down.  Take cash with you.  Even if you are able to find something, you will stand in lines for hours.  The same thing goes for gasoline and ice – try to keep you auto as full as possible ahead of a storm in case you can’t get what you need.

I pack the following:

Survival Mom:  Had you made any preparations prior to this or was it a rushed event?

Kathlyn:  Like I previously stated, many people who have been through this before keep supplies ready so I was, for the most part prepared, and all I had to do was pack my containers the car, get gas in the gas cans and head out.  Getting the patio set and all my potted plants inside the garage was harder and took longer than I thought it would, mainly due to the extreme temperatures and the fact that I was doing this by myself.

The main problem was the getting on the road because of all the traffic.  I decided not to get stuck once the roads were jammed and waited the storm out at my home then got out of here. 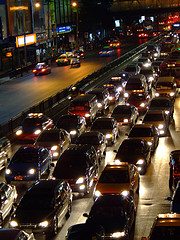 Survival Mom:  In retrospect, was that sufficient?

Kathlyn:  Yes, the only thing I ran out of was wee-wee pads for my Yorkies, and I was able to get them in New Orleans while I was staying there with my daughter.

Survival Mom:  Did you pack anything that you didn’t need?

Kathlyn:  No, not really. There is limited room for the essentials so start with them and pack the unnecessary stuff last, if there is room.

Survival Mom:  What do you wish you had packed? 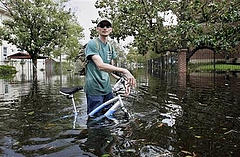 Survival Mom:  Describe your experience with the evacuation.

Kathlyn:  It was a very stressful situation.  If there is any way to shelter in place and be safe, that would be optimal.  I am planning to purchase a natural gas driven whole house generator to make that more of a possibility.  The heat, lack of comforts of home and being trapped in your car makes everyone cranky.  After I was able to get on I-10 headed east from Houston to New Orleans, I followed the National Guard as they cleared I-10 of debris.  There were abandoned cars, cars containing bodies of people, dead animals of every description and huge amounts of vegetation.  I was able to follow the guard unit until the Texas border with Louisiana then I was on my own along with some other drivers headed the same direction.  The roadway was blocked much of the way so you had to travel slowly and weave in and out to avoid hitting items in the road.

You can’t predict what others will do in similar situations with a lot of stress.  We heard reports of fights at gas stations because someone cut in front of someone already in line, people pulling guns and robbing people of money and supplies.  I kept my automatic loaded and under the front seat in case I needed it.  Thankfully, I did not although none of us in New Orleans left the house without protection.  They were still recovering from Hurricane Gustav from just a week earlier.

Survival Mom:  How did your kids cope with everything?

Kathlyn:  No children at home with Ike.  During Hurricane Alicia I had an 18 month-old.  She did not like being confined in a car seat and diaper changes were hard in a fully loaded automobile.  She slept after crying it out but until then it was stressful for us all.

Survival Mom:  What did you do to try to make the whole experience less traumatic for them?

Kathlyn:  I would bring more to entertain her.  Today’s cars are sometimes equipped with video players and older children should bring their video games and movies.  There is comfort in things familiar so let them bring some old movies and games as well as some newer ones.  When she got older we kept a little plastic box where we stored new color books, colored pencils (crayons melt in the heat down here), stickers and the like.  Each child should have their own so as to avoid arguments.

Survival Mom:  What did you learn from this experience?

Kathlyn:  If you are leaving, plan to leave early, before a mandatory evacuation is called.  Make your plans in advance.  People will call hotels and motels to reserve rooms in advance of the storm, so there may be nothing available, even if you can get there.

Even if there are evacuation plans for targeted times to leave you cannot plan for others leaving outside of their window.  There will be traffic jams and you don’t want to waste precious gas and patience sitting in traffic.

Be ready – spend the days ahead of the storm preparing your home by boarding windows, and getting your bug out supplies ready to go.  Decide what you will take and what must stay.  After you have decided and packed what you are taking you can spend some time to place items that must stay into waterproof containers, place furniture on top of canned goods wrapped in foil or plastic bags and cover with waterproof tarps. 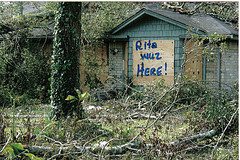 Hurricane Rita hit the summer before my daughter’s wedding.  We were making her gown and her bridesmaids’ dresses. I had hundreds of dollars of silk and lace that I was not leaving behind as well as my sewing machine and other things critical to make the gowns.  I could not replace them so I had my sister park her small car in my garage and drive my big Expedition filled with supplies, the fabrics and machines.  While everyone else was looking for boards and plylox hurricane clips I was searching for PVC pipes to wrap the silk around to keep it from becoming creased!

Survival Mom:  What advice would you give to moms who may face a future situation?

Kathlyn:  Prepare ahead of time so that you will not be in a panic.  Your children will pick up on your anxiety.  Convey to your children why you must do this and let them know you have a plan.  Allow them to help to the degree that they are able.  Let them pack their own things to take for entertainment.  They will probably ask a lot of questions so be prepared to answer them.

Survival Mom:  Is there anything else important you would like to add?

Kathlyn:  If you are leaving, plan to leave early, before a mandatory evacuation is called.  Make your plans well in advance.  People will call hotels and motels to reserve rooms in advance of the storm, so there may be nothing available for many miles, even if you can get there.   Consider what you will do or where you will go to ride out the storm.  Lots of folks headed in the direction the storm eventually took after leaving the coastal area and spent the storm in parking lots because there was no place for them to stay.

Even if there are evacuation plans for targeted times to leave you cannot plan for others leaving outside of their window.  Don’t wait for mandatory evacuations orders to be called.  There will be traffic jams and you don’t want to waste precious gas and patience sitting in traffic.

Be ready – spend the days ahead of the storm preparing your home by boarding windows, and getting your bug out supplies ready to go.  Do this early as high winds and rain bands can be experienced days before the storm arrives.  You don’t want to be on a ladder trying to install covers on second floor window if there is a stiff breeze.

Decide what you will take and what must stay long before you plan to leave.  After you have decided and packed what you are taking you can spend some time to place items that must stay into waterproof containers, place furniture on top of canned goods wrapped in foil or plastic bags and cover with waterproof tarps.

Remember that nothing is as important as the lives of your family and loved ones so prepare for them first – including the pets.

Survival Mom:  Is there anything you’ve done to make future hurricanes and evacuations less traumatic?

Kathlyn:  Some things I have done to make it safer for me to stay or easier to leave: 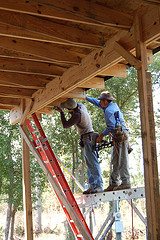 Note that all of this was not done at one time but over the course of the last several years: