I went to a gun show this morning with the Paranoid Dad.  It’s the fourth one I’ve attended in the past eight months or so.  In case you’re wondering why a perfectly sane, suburban SurvivalMom might show her face at one of these events, I really do have some perfectly rational reasons. 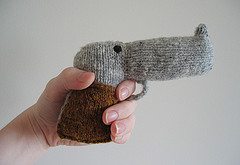 First, personal protection, and no, I don’t mean maxi-pads.  As people lose jobs and, coming soon, benefit checks from bankrupt government agencies, there will be an increase in crime.  As Gerald Celente says, “People with nothing to lose, lose it.”  I want to be equipped and trained to protect myself, my home, and my family, if need be.  I’d rather have a gun and not need it than need one and not have it, and a gun show is a great place to check out different styles, sizes, and brands.

Second, I’m a strong supporter of our Second Amendment rights.  Did you see how the Iranian protesters were treated by armed government agents?  Some of the horrific photos that came out of those protests show unimagineable brutality by the armed against the unarmed .  Lenin said, “One man with a gun can control one hundred without one.”

Another reason we go to gun shows occasionally is to purchase ammunition. Fact of the matter is that ammunition for firearms has been in short supply for nearly a year for any number of reasons.  When people do find the caliber they need, they will often purchase thousands of rounds at a time.  With cash.  Gun shows usually have plenty of ammo, at least during the first few hours.

If you love to people watch, a gun show is pretty hard to beat!  Gun shows are prime people-watching zones. Today, I saw everything from Tommy Bahama-clad corporate types to dreadlocked dudes in tie-dye.  Gals, if you like the grizzled, bearded types, make a beeline for your next local gun show, and it wouldn’t hurt to wear a NRA logo shirt.

Finally, I never know what I’ll find at a gun show.  I’m a huge history buff and love holding history in my hands.  At a gun show in March I held a genuine yellow Star of David with “Juden” embroidered on it.  Today I saw a beautifully engraved revolver from 1851 and at another booth, something called “gun juice.”  You’ll see hundreds of black handguns that all seem to look alike, except, of course, to the guys shopping the booths, but around the next corner there might be someone selling Civil War memorabilia.  In a strange way, it’s a garage sale on drugs.

If you haven’t been to a gun show, you’re missing out on a uniquely American experience.  Don’t pay any attention to the politically correct blah-blah-blah.  We’re blessed that we can own firearms, if we choose, and a gun show isn’t a bad place to exercise your Second Amendment rights.  If this topic interests you and you’d like to learn more, spend some time on Kathy Jackson’s awesome site, Cornered Cat.