Skip to content
6 shares
Some of the links in this post may contain affiliate links for your convenience. As an Amazon associate I earn from qualifying purchases. 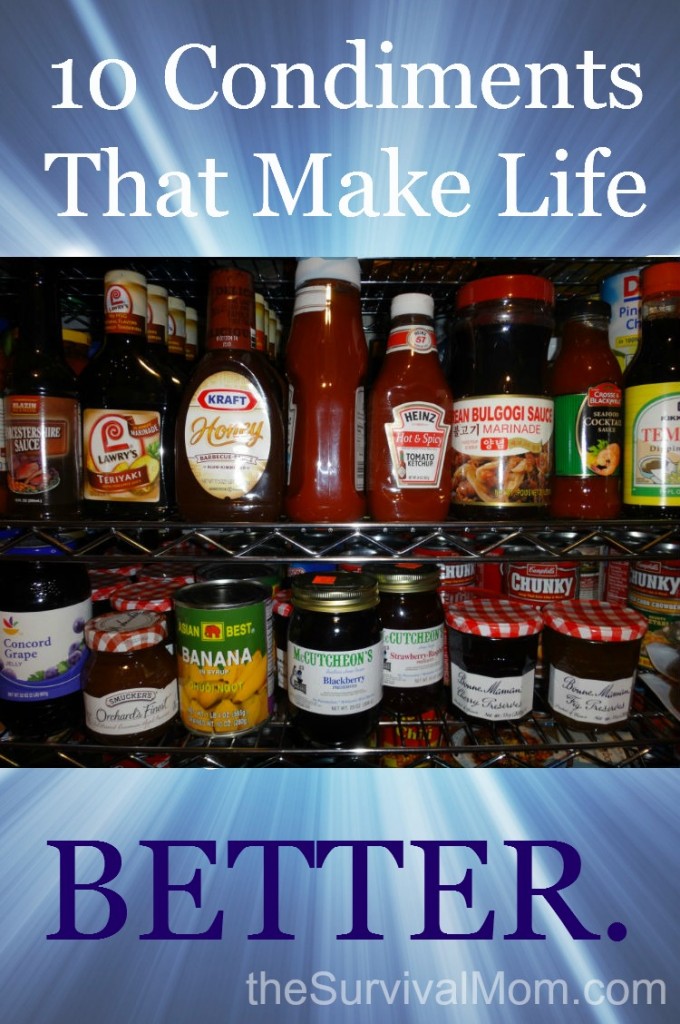 So something really, truly bad happens. The grid has been down for a month or a deadly pandemic has us sequestered in our homes. Or you’re simply out of work for months and the savings are gone.

You are living on your food storage.

Hey, it’s all good! You’ve got staples like grains,beans and rice. You’ve got a wide range of canned, freeze dried, dehydrated and home-canned foods. There’s a well stocked root cellar. You’ve even got waxed cheese and waterglassed eggs.

Guess what else you’ve got?

Scared people. And you’re one of them. One of the reasons for prepping is to provide a sense of continuity (not normalcy – things aren’t currently normal: river…Egypt…). Continuity is a tether to how things were and holds the hope of a return to that state or something like it.

No matter how well you’ve prepped, sooner or later you’re going to be eating a lot more basic staples than you’re used to. So imagine this: you’ve grilled up some bean-based veggie burgers or you’ve mixed up some mashed potato flakes and…then what?

Let’s lay aside spices, sauces and ingredients like honey for another day and confine ourselves to ready-made condiments. And really, even if things are perfectly normal, these are still great to have in the house.

The 10 Condiments that will save your sanity

Why? Because it’s ketchup, that’s why! Ketchup is the duct tape of the kitchen. Unrivaled for versatility on the table, it’s also indispensable on the stove and in the oven. It can make almost anything edible.

BTW,there’s more to ketchup than just tomatoes. Ketchups made from blackberries, lobster shells, onions, and more used to be produced at home and commercially. There are parts of England where mushroom ketchup is still commonplace. If you’d like to try your hand at these heritage flavors, you’ll have to resort to out-of-print cookbooks like an old Joy of Cooking. Or there’s this.

Sure, you’ll be making a lot of tuna and chicken salad with all that canned meat. But there’s also creamy salad dressing, pasta salad and the basis for tartar sauce. Mayo is an ingredient in a wide range of recipes.

This brings us back to Continuity. Try telling a 6 year old who’s life has already been upended that there’ll be no birthday cake this year. There are a lot of food storage chocolate cake recipes out there. Most taste odd or have  weird ingredients/procedures. Burrowing holes? Puréed beans?  No.

My mother used to make a good and simple one, but this recipe is even better. Top it with powdered sugar or soft-whip some canned cream.

There’s a lot of overlap between them because they both have high Umami. That’s a Japanese concept that boils down to a savory, meaty flavor where (typically) no meat is present. It’s caused by naturally occurring amino acids called glutamates, which are the source of concentrated laboratory MSG.

Ketchup has a lot too, but soy sauce and Worcestershire don’t have the high sugar and fruitiness, so it’s a very different flavor profile. Either one is a great way to perk up sad stew.

Mustard has a staggering number of other uses besides the “barbie,” especially in pan sauces and casseroles. You can’t make civilized baked beans without it. Sneak a touch into Alfredo sauce, turkey tetrazzini, and mac ‘n cheese. There’s also plain old honey mustard on almost anything. Combine with onions, rosemary and peach or apricot jam for an epic meat glaze!

You’re gonna make some bread with all that wheat,right? Also use on pilot bread or crackers, and in innumerable recipes, like the technique above. It can be stirred into plain muffin or coffee cake mix to make any flavor you choose, or thin it down and substitute for pancake syrup. Try sweetening herb tea with it and save the honey and sugar for other things.

Tortillas have an impressive shelf life. Fry some up and crack open a jar of salsa as a treat when nerves get frayed. It can also be tossed with rice or pasta for a quick one-skillet meal or added to soups and casseroles. If you bottle it at home you must use a pressure canner!

BBQ sauce makes the list in part because it covereth a multitude of sins. It also covereth game meats your family isn’t used to yet.

I grew up in suburban Rhode Island but was once in a rural conversation where hunters were discussing the pros and cons of various game meats. The subject of squirrel was broached. I remarked, “I’ve never had squirrel.” Someone at whose house I’d eaten many times wryly informed me:  “Oh yes you have…”

Tabasco, sriracha , whatever your family likes. Even if you don’t use any, store a couple bottles for barter or the inevitable guests you’ll be taking in. It can also be used medicinally in soup to clear a badly stuffy head.

9) Gravy ( or the stuff and knowledge to make it)

Okay, not exactly a condiment, but for our discussion it functions like one. Think of all that rice, pasta , potatoes, canned/ freeze dried meats, and game. All just crying out for gravy.

Sure, you can make it from ingredients, but it’ll help to have some ready to roll, and it’s shockingly cheap around the holidays. It’s also another cheap thing that becomes a valuable barter item.

The condiment your family can’t live without, whatever it may be. If your family can’t go a week without Thai peanut sauce or Branston Pickle, you’d better store some – especially if That Thing is laborious to make or contains lots of arcane ingredients!

I’ve left off things that aren’t used as often (plum sauce) or are easily and quickly made from common ingredients (tartar sauce and teriyaki). As for salad dressing, see my article here.

(Warning: Heresy Alert!) I have several problems with PB.

In my search for the right wrap-up to this post , I let my family read it. When it was suggested to me that my beef with PB just might be sour grapes because I’ve become allergic and can’t have it anymore, my brother channeled Darth Vader: ” Search your feelings, Beth. You know it to be true…”

Being a pastry chef, I think of PB more as a baking ingredient than actual food; it’s baking and confectionary applications are almost endless. Then there are the obvious uses on bread, crackers, apples, jicama, celery. The “Fam” suggested the aforementioned Thai peanut sauce, fried PB sandwiches, curry, and more…

…if you’re into that sort of thing.

Beth Johnson is a lifelong gardener and Certified Master Gardener in the Northeast. She is a former Pastry Chef and restaurant cook.