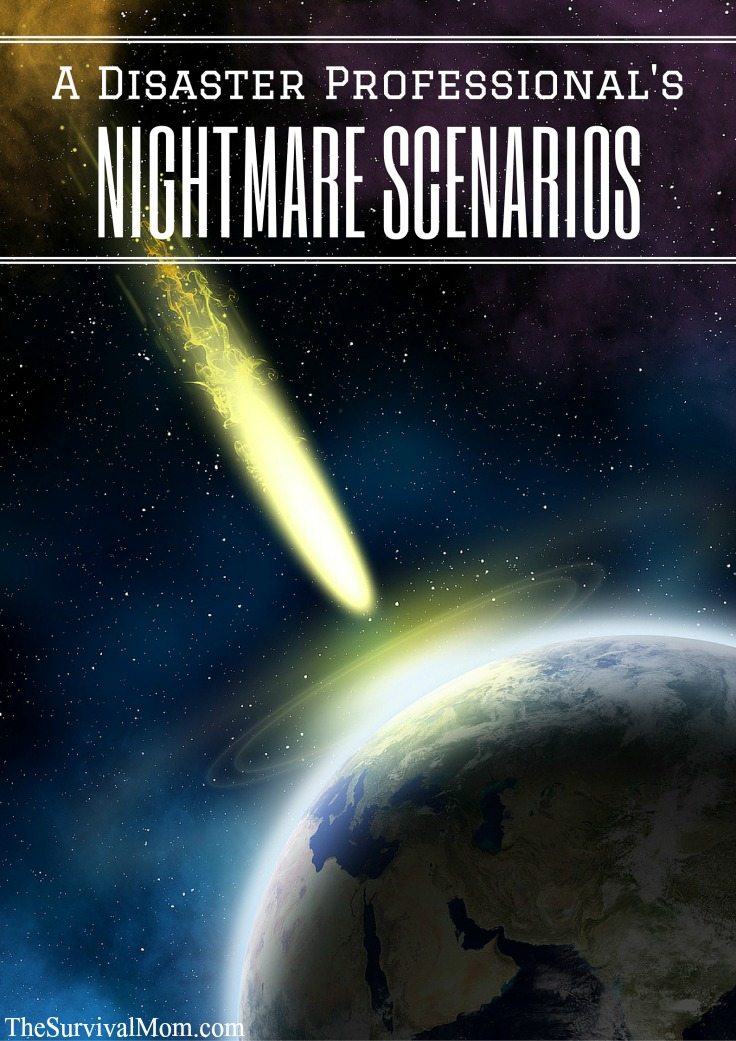 I have to admit that I’ve been resisting writing this article. Maybe it’s that superstition that says if you can think about it and describe it, it’s more likely to happen. But my friend Lisa, The Survival Mom herself, is persistent and she finally talked me into revealing my ultimate nightmare scenario. Why me? I currently work for a large state’s emergency services office, in a very large metropolitan area. I’m being a little cagey about exactly who I work for because I’m speaking here for me and not for my employer; I’ve worked in one aspect of the emergency services field or another for over 30 years. I still drive a car with red lights and siren at work every day, but most of my work is behind-the-scenes, supporting local governments that are experiencing a disaster and helping them plan for disasters in calmer times.

It’s been 10 years since Katrina devastated the Gulf coasts of Louisiana, Alabama, and Mississippi; like many in my field, I had the privilege of responding to the aftermath and helping our fellow Americans who were in need. While the more recent experiences with “super storm” Sandy have caused us to adjust our emergency response procedures, Katrina remains the benchmark for a catastrophic disaster in the United States.

Katrina was unique to me because two weeks after the flooding I was able to drive the deserted downtown streets of New Orleans, the lower ninth Ward, and the Port area without seeing anyone on the street. With the exception of the tragedy at the convention center and other areas where survivors were not able or willing to evacuate prior to the storm and flooding, everyone else was gone. My federal Disaster Medical Assistance Team was assigned to rehab and reopen the emergency room at the Kindred Hospital in downtown, but our only customers were other first responders who were assigned to get New Orleans back on its feet.

In 2008 I was fortunate enough to be involved in the writing of the Southern California Catastrophic Earthquake Plan, or “Cat Plan”. The United States Geological Survey had spent the better part of two years assembling experts in many fields including engineering, police and fire, social services, and economics and asked them to calculate the effects of a Magnitude 7.8 earthquake in Southern California.

What resulted was The Shakeout Scenario: over 700 pages describing the catastrophic results of this earthquake affecting seven counties and 20 million people in Southern California. I was so profoundly moved by the predicted mayhem in this document I wrote a book to help my family and friends understand the threat and prepare to survive this type of earthquake.

The Devil Is in the Details

The Cat Plan describes what actions the state and federal governments will take in response to such a powerful earthquake: Utilities will be repaired, food and water will be brought to the area, and survivors will be rescued and medically treated. In all, it is a fairly comprehensive roadmap for responders to follow to assist the affected communities.

But as the years have gone by, I have been able to integrate my prior disaster experiences with the framework within the Cat Plan. Unlike Katrina (and Sandy), there would be no significant warning of such a large earthquake, and therefore there would be no evacuation of the population possible. In a matter of minutes, millions of people would be cut off from food, water, communications, and transportation; and suddenly the New Orleans Convention Center becomes 1000 Convention Centers, spread over hundreds of square miles.

The only thing that will not be in short supply are news crews, filling the 24-hour news cycle with the death, destruction, and human misery that will result. Cascading effects, where for example the loss of electrical power also causes the loss of communications and water system capabilities, create huge obstacles to keeping survivors healthy and making progress on recovery.

Just as the California drought has demonstrated the folly of bringing water from hundreds of miles away to keep millions of water hungry lawns healthy, I believe the human need will greatly outstrip governments’ ability to maintain a population of millions in the midst of a catastrophic disaster zone. This is my nightmare: Millions of my fellow Americans reduced to the status of war zone refugee, the strong overpowering the weak in a daily competition for necessities.

As a professional, I have reflected on other scenarios that would result in similar catastrophic effects, some with prior warning like a hurricane, and some with no warning like an earthquake. Civilization is a fragile thing.

An electromagnetic pulse is no longer just a fantasy of the paranoid. With the proliferation of nuclear weapons among many countries, the ability of an enemy state, or non-state terrorist group to inflict an electromagnetic pulse on at least part of the United States is a very real threat. While not having the effect of collapsing buildings like an earthquake, damage to infrastructure in every aspect of our lives would be even more complete: Collapse of the electrical grid and interruption of control of the generation of power, pipelines, water systems, and traffic control systems both roadway and air would paralyze our society. 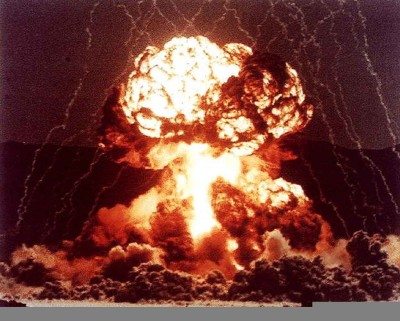 Next in my nightmare scenario list is the detonation of an improvised nuclear device in the United States. In the immediate vicinity of the blast, damage is similar to an earthquake, but with the additional problems of radioactive fallout and associated health effects.

While a significant number of blast survivors may experience radiation-related health effects, many times that number (“the worried well”) will seek medical attention due to lack of knowledge or misunderstanding of their risk. These people will overwhelm local health and medical systems, making it more difficult for those actually affected to get care.

It’s hard to beat “Extinction Level Event” for a cool-sounding catastrophe. A popular subject of recent movies, the impact of a meteor in a populated area of the United States would easily be a catastrophic event. In my opinion, the best description of the effects of an object striking the earth and the aftermath is in the Larry Niven and Jerry Pournelle novel Lucifer’s Hammer. Hint: It’s really, really bad.

In my field of Emergency Management, we take all of these scenarios seriously, and there are often alternatives to what appear to be unsolvable problems. For instance, rather than fighting a losing battle trying to keep a population of millions supplied in the middle of an earthquake zone, relocating a significant number of the survivors to an area unaffected by the earthquake would greatly simplify providing them sufficient care and shelter.

Another strategy to keeping survivors supplied with food and other needs is to prioritize restoration of power and other services to significant community businesses, such as supermarkets and big-box retailers. Not only do they have established logistics chains, they supply important economic support to the affected community such as jobs, access to banking services, and other ancillary services such as serving as heating or cooling centers during periods of extreme weather.

My advice to the non-professional is to keep doing what you’re doing in terms of your preparedness, but if you’re locked into the idea that three days of supplies will get you through a disaster you’re wasting your time. In a truly catastrophic incident, you will want to have at least two weeks of supplies, and if you can swing it, three weeks is even better. Also, have a plan to take your supplies with you if you are forced to evacuate. Remember, civilization is fragile. 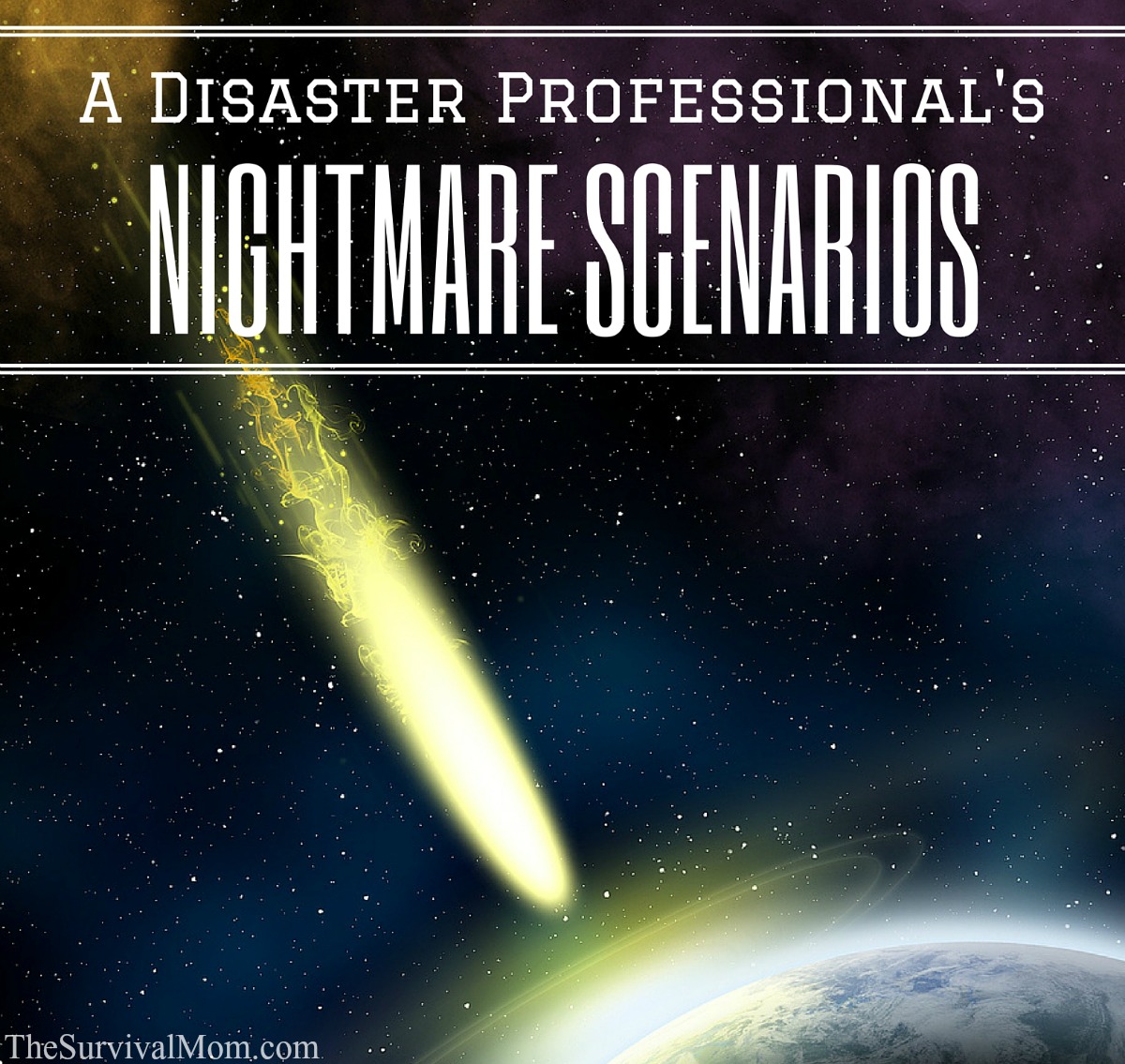 GET PREPARED WITH THESE RESOURCES: