117shares
Some of the links in this post may contain affiliate links for your convenience. As an Amazon associate I earn from qualifying purchases. 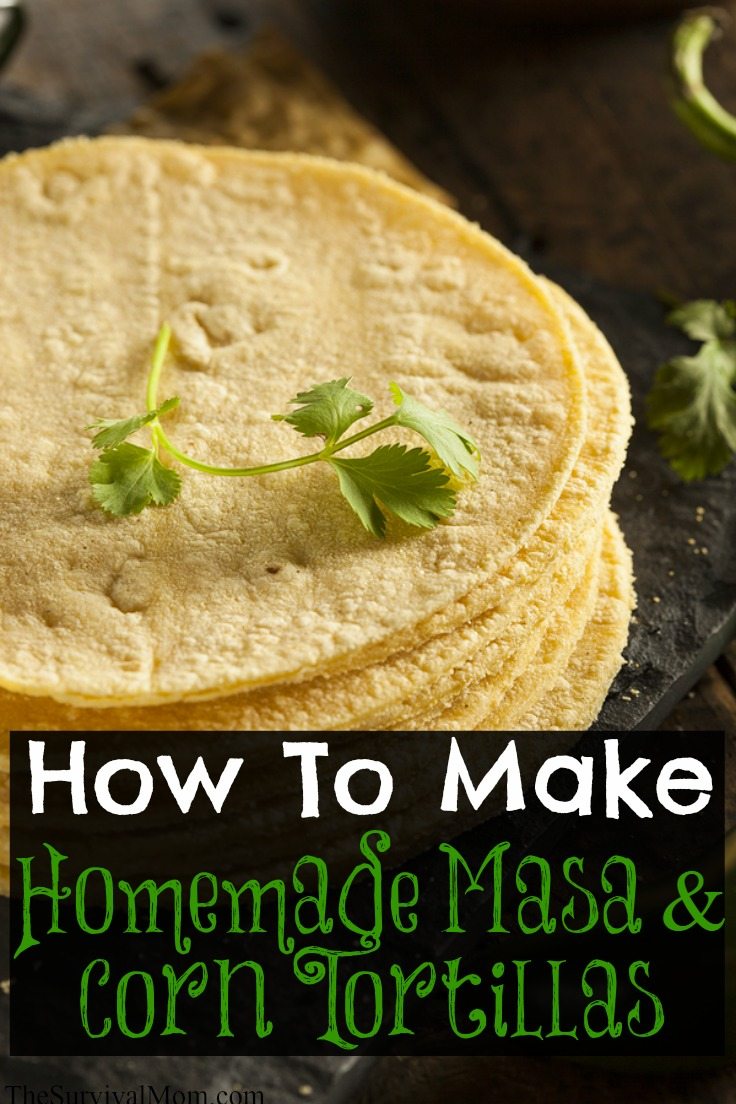 This is the second half of my two-part series addressing the trend in survival circles of grinding popcorn for cornmeal and nutritional concerns about cornmeal, in general. In part one, I outlined how corn must be processed before eating in order to to free up the nutrients. Skipping this step can result in a terrible vitamin deficiency known as pellagra.

If you’ve stocked up on popcorn, planning to grind it, skip the grinding. Just go ahead and pop it. Eat it lightly salted, and relish the joy that comes from knowing that you are eating popcorn the way it was meant to be eaten.

But popcorn is only part of the story. It’s not the only whole grain corn available on the open market. Honeyville Grain, for example, sells yellow, white, and blue corn in bulk. From this, you can make homemade masa, the key ingredient of many tasty food items, such as tortillas, tamales, and pupusas.

Corn was developed by the ancient American peoples to make specific foods unique to their culture. Corn was a staple in the Americas long before the Europeans arrived on the scene, but they never contracted pellagra. However, the Europeans using the same became quite ill. They were using this new grain to make foods that they were already used to eating, namely bread (cornbread) and porridge (grits/ polenta). In other words, they were using a New World ingredient to make Old World food, and it didn’t entirely translate. They were missing something crucial: nixtamal! To get out of corn everything that it has to offer, you can’t use it in a European way. You have to use it in a Native American way.

Disclaimer: this takes a lot more preparation and effort than merely grinding it in your Nutrimill. However, I’m confident that once you try real, homemade tortillas from real, homemade masa, you will never want to go back.

Rinse your corn and put it in a saucepan over medium heat with the calcium hydroxide/pickling lime and water. Slowly bring it to a boil over a period of 20 minutes or so. Let it continue to boil for 10-15 minutes, then remove from heat. Let it sit undisturbed overnight or for at least 8 hours. This is when the magic happens — the chemical reaction that changes the nutrients in the corn so that they can be absorbed by the human digestive tract.

When the allotted time has past, the pericarp, the outside bit of the corn, will have loosened considerably. Put the corn in a colander and rinse with cool running water as you rub the corn with your hands. Keep rubbing and rinsing the corn until all traces of lime and pericarp are washed away.

Place the corn, now technically nixtamal,  in the food processor with the salt. Process on High until the corn is at the proper consistency – it should be chopped up finely enough that it can be formed into balls. Sometimes I have to add as much as 3-4 tablespoons of additional water to get it the proper consistency.

Ta-da! You have made masa. This can be used for humble corn tortillas, tamales, and also pupusas, which are a kind of stuffed tortilla. 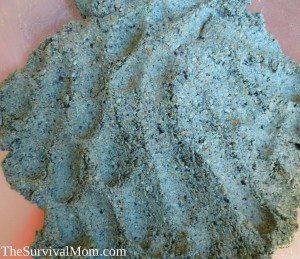 Here’s a picture of some masa I made. You may notice it is blue. No food coloring was added. That is the real, actual, non-photoshopped color. That is because I have a lot of blue corn in my food storage. I chose blue corn for two reasons:

1) Why bother with boring yellow corn when it can be blue?

2) Blue corn is higher in protein.

Also, there does not currently exist any GMO blue corn on the market. You can be guaranteed a non-GMO product when purchasing blue corn, if that is something that is important to you.

To turn your masa into tortillas, first line your tortilla press with plastic wrap to keep the masa from sticking. Place a small portion (about 2-3 tablespoons worth) in the tortilla press. Cook about 1 minute on each side on a HOT griddle or skillet.

I adore homemade masa and corn tortillas, and I love making them from scratch. They are immensely popular with my family, including the picky toddler.

I hope you will look at corn a little differently from now on. It is an extremely versatile food and full of nutrition when prepared correctly. Grinding unpopped popcorn into cornmeal, while it might sound like a good idea, is not an efficient use of food resources, but that doesn’t mean you should forget about corn as a food storage item. Popcorn can be popped, and dent corn can be made into masa to make tortillas. If you haven’t already included corn in your emergency preparedness, do so today! 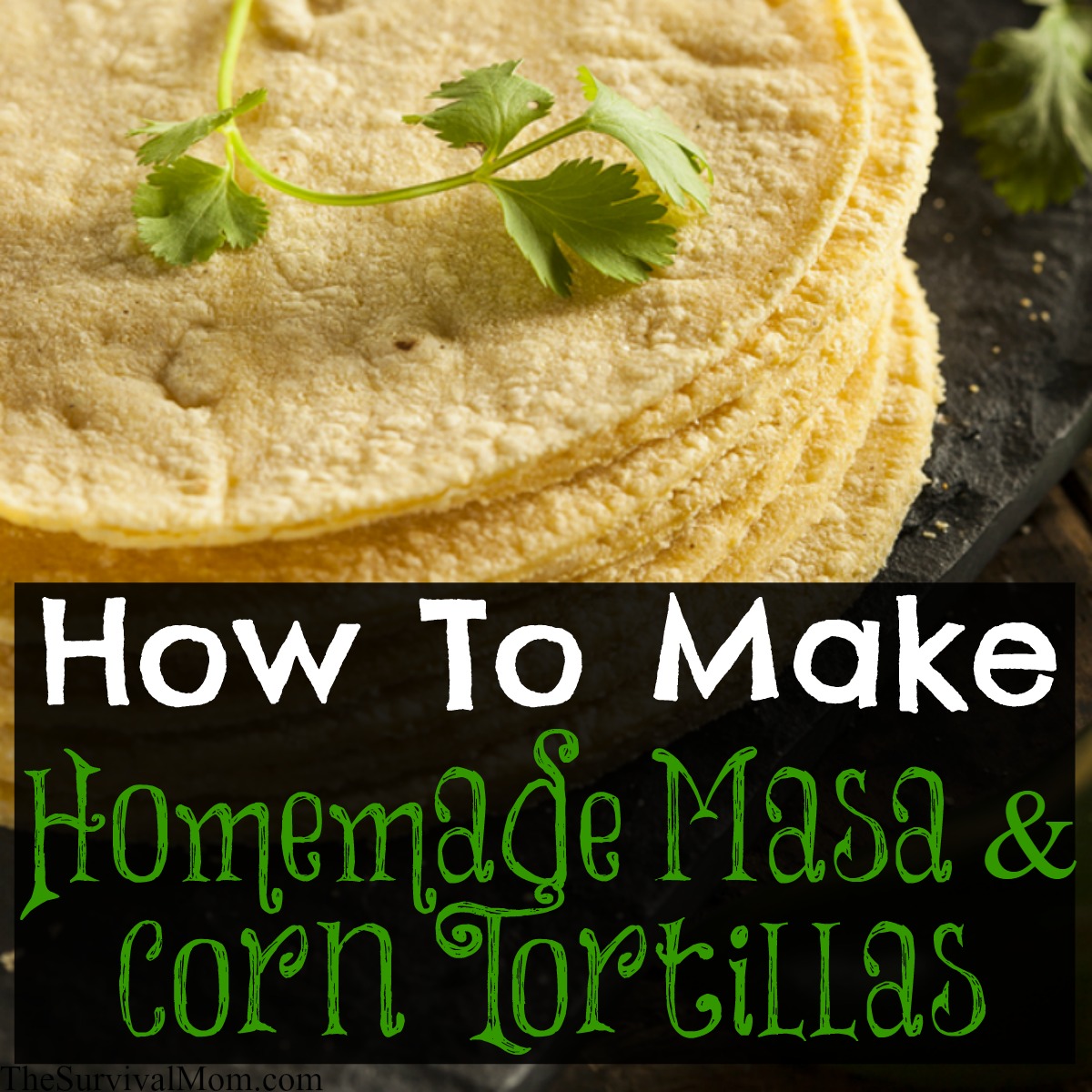